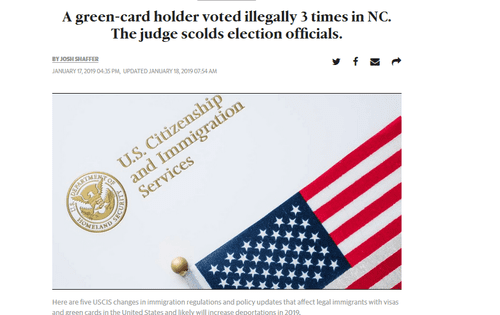 I've been assured by the media and their pet Democrats that this never happens. But here's another case.

Hyo Suk George lived legally in the United States for nearly 20 years before she voted in her first election, coaxed to cast her ballot by an enthusiastic town council member at church.

To register, she presented a green card, Social Security number and driver’s license — proof enough for the elections officials in Columbus County — then voted in 2008, 2010 and 2016.

But on Thursday, George, 70, faced charges of illegal voting from the U.S. Department of Homeland Security, for which she might have spent six months in prison. Instead, U.S. District Court Judge Terrence Boyle chastised the elections board in Whiteville, letting George go with a $100 fine.

“So they see a green card and say, ‘That’s OK’ because they don’t know what they’re doing,” said Boyle, chief judge of the eastern district of North Carolina. “They ought to be a little smarter than that.”

The judge placed the blame on the elections board, but one wonders about the civic spirit of a non-citizen who thinks that non-Americans are allowed to vote in American elections. The franchise means very little to Americans today, probably because your individual vote is just going to be unmade by an illegal, non-citizen, of post-1965 Hart-Celler Americans voting.

The American Civil Rights Union v. Dr. Brenda Snipes will finally give NVRA Section 8 the teeth it needs to protect authentic votes by defining the processes and procedures election officials must take to keep their voter rolls clean and accurate – literally cutting off the lifeblood of vote fraudsters.

ACRU v. Snipes is scheduled for oral argument on March 12th and it’s thecase that can make a difference in how honest our elections will be in 2020.  Florida, Ohio, Texas, and Virginia are the key battleground states, and if even one outcome is stolen through fraud, the national election could be thwarted.

Florida’s Broward County had the most well-reported election integrity problems in 2018, but it is not alone. Voting rights activists who reject voter photo ID laws, citizenship requirements to register to vote, clean voter rolls, and other common sense election safeguards have diluted the votes of the conservative electorate, particularly in places like Orange County, California.

Of course, one of the easiest things that could be done would be urging a national voter ID act, based on the standards already in place in Mexico. President Trump could even simply say that we are basing the national voter ID explictly on what the Mexicans do, making it very difficult for Democrats to call it "racist." Yet this is another policy that no one in a position of authority seems to know about. Instead, the Republicans just sit there, vainly hoping the courts will save them from their own cowardice.