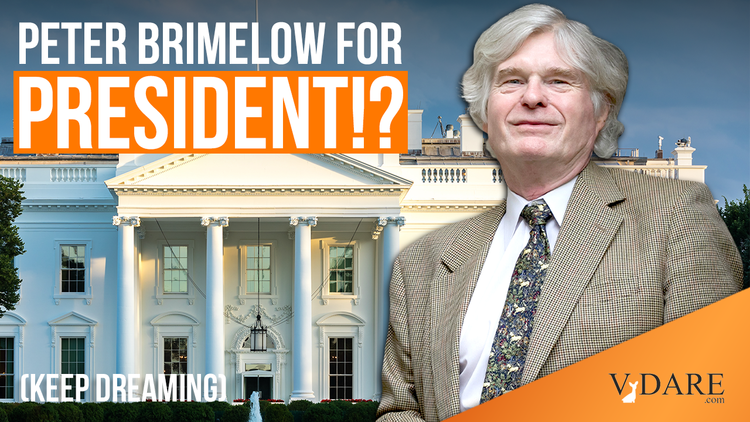 In The Week, Ryan Cooper [Tweet him] has a piece called The post-Mitch McConnell GOP is going to be a carnival of madness. [December 7, 2020] which has this remarkable paragraph:

So it will be bleakly interesting to see what will happen without McConnell providing some semblance of strategic direction to the party. His logical successor, Senate Majority Whip John Thune (R-S.D.) evinces little of McConnell's amoral will-to-power, nor much Trump-style charismatic bluster. The temptation for other Republicans to attack Thune, or whoever else ends up on top in the Senate, for insufficient support of future Republican presidential nominee Peter Brimelow will be strong.

I believe Cooper's uncharitable intention is to argue that the GOP has gone stark raving mad, and the next step after nominating an implicitly white (AKA American) candidate like Trump is to nominate an explicitly white (actually explicitly American) candidate like Peter. (The link on Peter Brimelow's name above, provided by Cooper, is to an attack on him by Alex Kotch, debunked here, which called Peter "president of the white nationalist hate group VDARE" and "blatantly racist".)

Some surprising people have run for President, but Peter is not going to be one of them, because, as has frequently been pointed out, he was born in England, in Warrington, Lancashire, and is a naturalized American citizen.

In becoming a naturalized citizen, Peter swore to uphold and defend the constitution, including the "Natural Born Citizen Clause", which states

In 2001, National Review  immigrant enthusiasts  John J. Miller and Ramesh Ponnuru wrote a piece called  Immigrants for President An idea for Bush.  July 9, 2001, suggesting that the Natural Born Citizen Clause clause be abolished, if, as they put it "the GOP wants to expand its reach among Hispanics and Asian Americans...."

I mocked them here, saying that while they were probably thinking of electing people like Arnold Schwarzenegger, they might wind up with a President Peter Brimelow. Now that would be an unintended consequence! See NATIONAL REVIEW Endorses Who for President?, July 11, 2001.

A few years later, Ron Unz, in his push for a national Minimum Wage, said that

Just a few days ago, VDare.com, the premier “hard-core” anti-immigration webzine, ran an article with the provocative but accurate title “Ron Unz’s Minimum Wage Proposal—Make Illegal Immigration Unprofitable!”, which I’ve heard attracted a rather enthusiastic reaction from many readers.

Obviously no respectable Democrat these days would ever dare advocate an anti-immigrant measure.  But could a $12.00 per hour minimum wage be seen as “anti-immigrant” if it would probably draw the strong support of 95% of America’s immigrants?  I’d guess that if VDare.com’s Peter Brimelow ran on a $12.00 platform and faced an Obama-Krugman ticket running on $9.00, his Hispanic landslide would be the most lopsided in American history.

Once again, I pointed out that Peter Brimelow can't run for President, because of not being "natural born".

This "natural born" thing is important to conservatives.

Even assuming, as I do, that President Obama was physically born in Hawaii, and was the son of Barack Sr. and Stanley Ann Dunham, there are complex questions of "natural born-ness" that might have disqualified him, if any Republican had had the courage to raise them in court before he took office.

Blacks seem to feel any  objection to someone not a "natural born citizen" as President must be grounded in anti-Black racism. See It Started With ‘Birtherism,'by Jamelle Bouie, The New York Times, November 26, 2020.

Ann Coulter points out that really white people have been subject to such objections:

How about the "birthers" against John McCain, who made an issue of his being born in the Panama Canal Zone? Was that racist? NO! Do you see anything about McCain in the folk tale?

What about Chester Arthur, the 21st president of the United States, whose American citizenship was widely challenged on account of his Canadian parentage?

She herself has questioned whether Ted Cruz, son of a naturalized Cuban immigrant, and physically born, as a matter of public record, in Alberta, Canada, is what the Constitution calls "natural born". See Coulter On Cruz's Ineligibility: "We're All Ruth Bader Ginsburg Now".

So the Left, who really have been going stark raving mad, may run a foreign-born candidate, or possibly even an illegal immigrant, for President, but the Republicans aren't going to nominate Peter Brimelow.