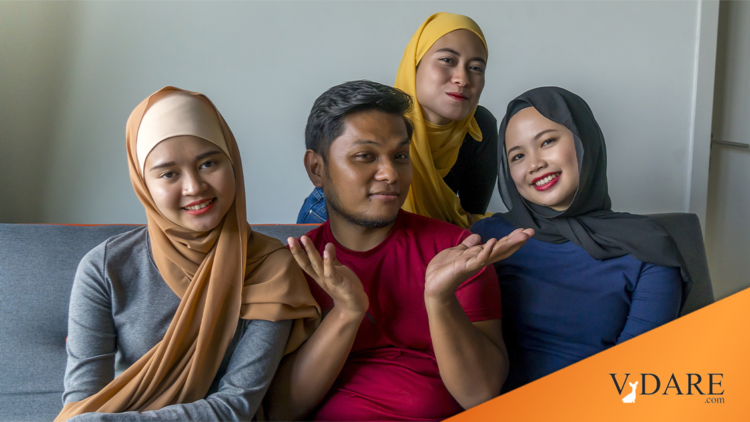 I’m coming around to the notion that a Polygamy Push is fairly likely to follow Transmania the way it followed gay marriage. A friend lists some tweets and articles to look out for:

They’ll come out on the offensive

“People are DYING because of our old, stupid, bigoted laws on what the ‘perfect family’ should look like.”

As you know, “Someone is DYING because you are arguing with me about this and not just letting get what I want” is the mantra of the gay and trans right activists.

“Black trans women are being MURDERED while you want to erase their existence with your pettiness.”

The push will be swift and of the essence because parents will be “separated” from their numerous wives and children.

I suspect polygamy will also get tied into the upcoming big push for more African immigration. The African population explosion means that there will always be more Africans wanting to get the hell out of Africa. And there will be more elites in the U.S. with cousins in sub-Saharan Africa.

The dominance of Black Lives Matter/Intersectionality means that American institutions will be under ever more pressure to hire more Black Bodies. But it’s not as if there is a whole lot of underemployed African-American talent on the bench.

So, corporations might start looking around for workers with black bodies but without African-American attitudes. Importing more Igbos of Nigeria might sound like a good plan to get some bourgeois blacks to meet their Diversity Inclusion Equity quotas.

There has long been rightwing sentiment toward Igbos, going back to the Biafran Civil War of 1967-1970, when many of the old colonial hands in the British Empire sympathized with Igbo independence. For example, Tory thriller novelist Frederick Forsyth did so much detailed logistical research for his 1974 novel Dogs of War into how to overthrow the government of Equatorial Guinea in order to provide a national home for the Igbos after their defeat by the Nigerian central government that many suspect Forsyth actually intended to carry out the coup.

So, another prediction: we will start to hear about how Igbos are persecuted in Nigeria and thus deserve refugee status, with the campaign modeled on the Save Soviet Jews drive that was so successful in Congress, even after the Soviet Union was gone.

One complaint of Igbos at present is much like that of Soviet Jews: they are discriminated against by the affirmative action system in Nigerian college admissions. Residents of Nigerian states in the Muslim north can get into the top university with much lower test scores than residents of Igbo-intensive states.

You might think that in the post-George Floyd world, complaining about affirmative action would go nowhere. But, you see, affirmative action in Nigeria benefits, more or less, the majority and hurts the minority, much like affirmative action did in Brezhnev’s Soviet Union. So therefore Igbos are threatened by Trump-like Populism and must be airlifted to the U.S. Or something.

To bring this rambling post back to polygamy, I’d assume that educated Igbos tend to look down on polygamy as something much more common among the poorly educated Muslims of northern Nigeria.

But, young female Igbo-American interns at the Washington Post will no doubt be willing to hop on the coming bandwagon that White Supremacist laws against polygamy must be abolished by writing op-eds about how some white kid in third grade once asked “Where are you from?” and then followed up with, “So, is your family polygamous, or to be precise, polygynous?” And then tried to touch her hair.