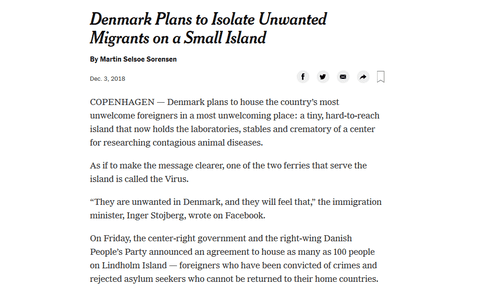 "Getting to Denmark" vs. "Staying Denmark"

“Getting to Denmark” is a phrase coined by political philosopher Francis Fukuyama to denote a good goal for most countries around the world: becoming a stable, nice End of History country like Denmark. But as I have often pointed out, history hasn’t ended in Denmark, which in the 21st Century has taken the lead, since the 2001 election, in working to be Staying Denmark by not letting itself be overwhelmed by immigration fraudsters who have the goal of Getting to Denmark personally, by hook or by crook.

COPENHAGEN — Denmark plans to house the country’s most unwelcome foreigners in a most unwelcoming place: a tiny, hard-to-reach island that now holds the laboratories, stables and crematory of a center for researching contagious animal diseases.

As if to make the message clearer, one of the two ferries that serve the island is called the Virus.

“They are unwanted in Denmark, and they will feel that,” the immigration minister, Inger Stojberg, wrote on Facebook.

On Friday, the center-right government and the right-wing Danish People’s Party announced an agreement to house as many as 100 people on Lindholm Island — foreigners who have been convicted of crimes and rejected asylum seekers who cannot be returned to their home countries. …

This summer, a ban on face coverings was introduced and quickly nicknamed “the burqa ban” as it followed a debate on the Islamic garment seen by some as “un-Danish.” This month, Parliament is expected to pass legislation requiring immigrants who want to obtain citizenship to shake hands with officials as part of the naturalization ceremony — though some Muslims insist that they cannot shake hands with someone of the opposite sex.

The government contends that hand shakes are “a basic Danish value.”