No Child Left Behind: Chronicle of a Fiasco Foretold 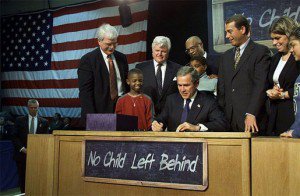 Remember when in 2002 George W. Bush and Teddy Kennedy got together and hammered out federal legislation mandating that every public school student in America test above average by 2014?

Hey, I just remembered, it’s 2015 now. Did the No Child Left Behind law work?

Similarly, in 2005, the Los Angeles School Board decreed that by 2017 every student in Los Angeles must rank in the top third.

From the Los Angeles Times, a report on an education fiasco that’s been creeping

As many as three-quarters of Los Angeles 10th-graders are at risk of being denied diplomas by graduation because they are not on track to meet rigorous new college prep class requirements.

This has prompted some in the L.A. Unified School District, including Supt. Ramon C. Cortines, to suggest reconsidering the requirements, which were approved a decade ago to better prepare students for college. The plan came after years of complaints that the nation’s second-largest school system was failing to help underprivileged students become eligible for and succeed in college.

In an interview, Cortines said the effort is laudable, but that it would be unfair to penalize students who otherwise could graduate. …

But the college prep requirements still have significant backing within the district and among community activists, who say L.A. Unified must do a better job helping students pass the challenging classes.

L.A. Unified received national attention with its college prep goals, which were approved in 2005. The district allotted 12 years to get there — the entire education of a child who entered the system at that time.

Students in the class of 2017 must earn a C grade or better in a set of courses aimed at making all seniors eligible to apply to the University of California and California State systems. These include four years of English and three years of math, including geometry and intermediate algebra. …

Among about 37,000 students remaining in the class of 2017, only 26% are on track to graduate and 17% are repeating 9th grade, according to district research.

The word “superannuation” comes up a lot in P.G. Wodehouse stories to describes the termination of his characters’ scholarly careers at Eton or Harrow due to getting on in years. It would seem a pretty useful word for describing the impending fate of a lot of LAUSD students.

One of the key documents of America’s post-Sputnik technocracy was the 1960 California Master Plan for Education organizing the state’s three tiers of public higher education: University of California research universities (such as Berkeley, UCLA, and Davis), Cal State teaching universities (such as Cal State Long Beach), and Community Colleges for the first two years of college plus older students going part-time.

- [The University of California system,] was to select from among the top one-eighth (12.5%) of the high school graduating class.

?- [The Cal State University system, such as Cal State Long Beach] was to select from among the top one-third (33.3%) of the high school graduating class.

-? California Community Colleges were to admit any student capable of benefiting from instruction.

Whether students make the top one-eighth for UC or top one-third for CSU is determined by a combination of grade point average and standardized test scores.

To make grade point averages comparable across high schools for determining who qualifies for the top eighth or top third of high school graduates, the state specifies fifteen A-G required courses, such as three years of Algebra, Geometry, and Algebra II upon which you must make a C or better. (Conversely, Driver’s Training, Auto Shop, or Sex Ed don’t count toward the A-G requirements.)

The push for mandatory college-prep courses was based on the apparent success of San Jose Unified, which had adopted a similar policy. But its gains in college-prep rates were later determined to be inflated by an accounting error. A 2013 Times review of the data showed that most San Jose students never qualified to apply to a state college.

Back when the U.S. was serious about beating the Soviets in the space race, we couldn’t afford to be this obtuse.

How can our future Mars colonies be free of sexism and racism?

The white, male European conquerors of the New World and 19th-century American pioneers of Manifest Destiny still colour the space age, so is it a myth that we’ll turn nice on Mars?

Don’t worry about it: we’re not likely to get there at this rate.

Seriously, my recent Taki’s column was about extending the Bill James / Moneyball baseball statistics mindset to a field that could really use it like medicine, but education is unbelievably deprived of incisive quant thinking.