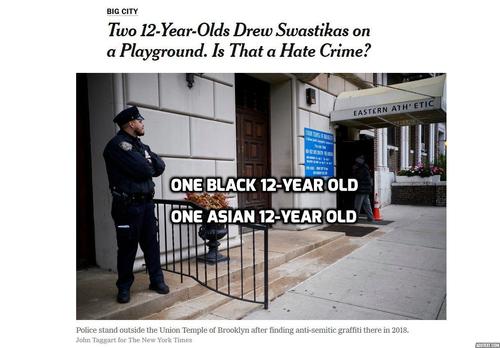 Perhaps I’ve been overhasty in assuming that the Coalition of the Margins so diligently assembled by the Democratic Party has little to unite them other than the KKKrazy Glue of hate hoaxes implicating Great White Defendants.

For example, recall last week’s Hate Crime Crisis of the Century, in which the Governor of New York proudly announced that the NYPD’s manhunt for the terrorist who drew swastikas in chalk on a Queens playground had got their man (and then released him to his mom because he’s twelve).

Today, it turns out, however, that this wasn’t a Lone Wolf 12-year-old, it was a multicultural gang of two 12-year-olds, and they are Diverse!

Two 12-Year-Olds Drew Swastikas on a Playground. Is That a Hate Crime?

At some point during the winter break last month, someone covered the playground of a public school in the Rego Park section of Queens with swastikas and other anti-Semitic sentiments. Either poor spellers or unfamiliar with the exact phrasing of the Nazi salute, whoever was responsible inscribed the words “Hail Hiter” on the ground in chalk.

Several days later, two boys were arrested and charged with aggravated harassment. They came from the neighborhood, one that has long been predominantly white and Jewish but grown more diverse in recent years with an influx of Asian immigrants.

After the initial arrest, the Police Department’s chief of detectives, Dermot Shea, quickly took to Twitter to commend the “great job” accomplished by his colleagues in the hate-crimes unit he oversees and to say that “no matter the face of hate,” New York will exhibit “ZERO tolerance” for it.

In this case the face of hate was the face of two children of color — one black, the other Asian — who were 12 years old.

Cynics like Steve Sailer have long suggested that the Democrats’ Coalition of the Fringes will find few common goals to draw them together, but this shows that America’s black and Asian juvenile delinquents can come together to draw non-dyslexic swastikas and even a quite accurate hammer & sickle in chalk in order to annoy their neighborhood’s socially dominant ex-Soviet Central Asian Bukharian Jews. As we know, Diversity is our strength, and if that’s not Diversity I don’t know what is.

… Surely the bigotry that has been making more frequent appearances on the American stage since the Trump years is partly to blame.

The causal mechanism of how this is Trump’s Fault is perhaps still vague at this point, but trust me, Ginia Bellafante, it just is.

Whatever the cause, it seems fairly clear that arresting 12-year-olds, especially at a time when criminal justice reform has concentrated on diverting young minorities from the system, cannot be considered a solution. …

“Do you remember the song from ‘South Pacific,’ ‘you have to be taught to hate?’” asked Toby Ann Stavisky, a state senator representing the relevant district in Queens.

I’ve long argued that Oscar Hammerstein II is, along with perhaps James Michener, the most influential thinker of the Obama Age.

“These children were taught to hate, and I’d be very interested to learn where they learned to hate.”

After all, until Trump came along, nobody had ever heard of 12-year-old boys being bad.

Or perhaps we might also wonder if and where they learned that it is perfectly fine to express a mischievous, rebellious or playful side through the use of such cruel and divisive imagery. …

Just this week during an assembly at Sidwell Friends, the progressive Quaker school in Washington from which Chelsea Clinton and Malia Obama graduated, a student participating in a trivia contest flashed a user name consisting of two swastikas onto a screen visible to the whole auditorium. …

And in Orange County, Calif., a group of high-school students came under fire for building a swastika out of red, plastic beer cups during a drinking game at a party. Were they bilious members of the alt-right? …

… We do know that the school where the defacements occurred will conduct a read-aloud of “A Picture Book of Anne Frank,” and have students create stenciled murals “around positive messages about diversity and inclusiveness, including around religion,” according to the city’s Department of Education.