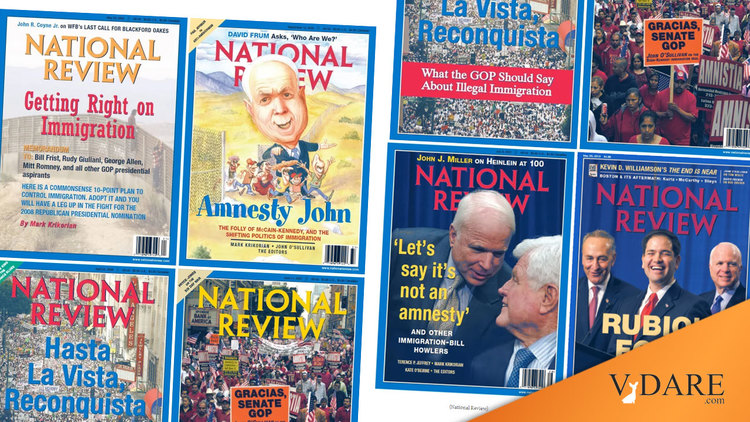 National Review Online, to which I contributed for twelve years until they dropped me in 2012, is celebrating its 25th anniversary. People are asking me how I feel about it.

As always when National Review is the topic, I honestly can't register much feeling at all. I started my freelance career in London at the tail-end of the old devil-may-care Fleet Street ethos, when getting fired from a newspaper or magazine, often for ridiculous reasons (although mostly for offenses against sobriety), was a common occupational hazard to be borne cheerfully, then boasted of in dinner-table anecdotes. If your stuff was any good, some other outlet would hire you, so… hey.

It helped that when National Review dropped me I was halfway through a course of chemotherapy. When you're enduring something as gruesome and debilitating as that, nothing else seems worth getting worked up about. You are locked in stiff stoicism.

At this point I actually feel a bit sorry for them. That older, genteel style of William F. Buckley conservatism is road kill today. They were supposed to stand athwart History crying "Stop!" but history ran right over them and left them flattened on the asphalt.

It's a shame. Our society is coarser, stupider, less law-abiding and less free than Bill Buckley's U.S.A., the U.S.A. of fifty or sixty years ago; but not much of that is their fault.

They're now doing some retconning of their record, presumably in an effort to reposition themselves as credible combatants in the Cold Civil War.

Monday this week, in support of a fall fundraiser for the NRO website, they put out a page boasting proudly about their "25 Years of Blowing the Whistle on Immigration B.S.," end quote, with six covers from National Review in support.

Twenty-five years is 650 issues for a fortnightly magazine, so that's less than one percent of cover topics. You can be excused for having missed the sound of that whistle blowing.

I notice also that the date range on those National Review covers is strikingly narrow. The sixth cover, targeting Marco Rubio and the Gang of Eight, is from mid-2013. The other five all occurred in a two-year period from mid-2005 to mid-2007, the years of the McCain-Kennedy and Bush-Kennedy legislative efforts.

And all of them sought to tackle illegal immigration. Did National Review have any cover stories on the impoverishment of middle class Americans by legal immigration—the issue that probably carried Donald Trump over the line to victory in 2016 (not that he subsequently did much about it)? We are left to wonder.

As Peter Brimelow pointed out here at VDARE.com, the one National Review cover they did not include was the one from June 1992 promoting Peter's seminal article calling for immigration restriction, the article that then became his book Alien Nation. Peter was dropped from the magazine five years later. All right, all right, that 1992 cover was before National Review ONLINE's 25 years; but surely a mention wouldn't have hurt.

And I myself was in-house at National Review for half of those 25 years they're boasting about, mostly the first half. Here is a comment I passed in July 2014, two years after leaving the magazine.

When I was working at National Review, part of the four-year Presidential election cycle was that aspiring Republican candidates would drop by at the office to give us some face time. We'd all sit around a table in the library with the candidate and ask him policy questions. Mitt Romney, Rand Paul, Newt Gingrich, even that black guy—I've forgotten his name—who used to run the pizza chain, but got caught with his shirt-tail hanging out, they all dropped by.

It was always the case at these meetings that I would be the one to ask about the candidate's position on immigration. Always: Nobody else ever raised the topic. When I raised it, the other National Review staffers would roll their eyes or look embarrassed. It just wasn't a respectable subject. I was considered a bit of a bomb-thrower for even wanting to talk about it.

I have nothing to say against Bill Buckley, who was always kindly and supportive towards me; but his style of conservatism no longer has any relevance.

Today we confront a ruthless and totalitarian ideology here at home. Genteel disagreement won't save our country. We need to rally Americans behind nationalism, constitutional liberties, a firm rule of law, honesty about race and sex, educational excellence, repatriation of our military, immigration minimalism, and a ruling class that gives a damn about ordinary citizens, with our middle and working classes thriving in domestic industries, as they used to.