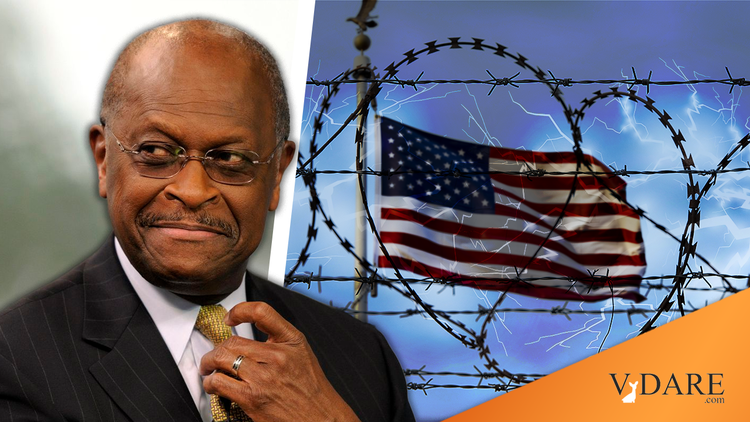 Herman Cain just died of the China Virus.  Cain was a "dark horse" candidate in the 2012 presidential race. The expression "dark horse" has no racial connotations naturally, but when Dave Weigel  wrote "I interviewed the dark horse 2012 GOP presidential candidate..." he got a Tweet questioning his usage of the term.

He replied that it was the term Cain used himself, and later wrote

There is a political message here, and it is “Hey, dominantly white audience – I am the least PC person you will ever meet.”

The reason Cain was a "dark horse" (i. e., an unknown, outsider candidate) was that, like 2016 victor Donald Trump, he was a corporate CEO, entrepreneur, and motivational speaker with, as Weigel put it, "as much experience in elected office as Wendell Willkie!"

He wasn't politically correct, and on the campaign trail, questioned about his knowlege of international affairs, he said he didn't know who the President of " Ubeki-beki-beki-stan-stan" was.

Republican presidential candidate Herman Cain said Saturday that part of his immigration policy would be to build an electrified fence on the country’s border with Mexico that could kill people trying to enter the country illegally.

The remarks, which came at two campaign rallies in Tennessee as part of a barnstorming bus tour across the state, drew loud cheers from crowds of several hundred people at each rally. At the second stop, in Harriman, Tenn., Mr. Cain added that he also would consider using military troops “with real guns and real bullets” on the border to stop illegal immigration.

The remarks were among the most pointed yet by Mr. Cain about illegal immigration, and they come as he is enjoying a surge in national political polls on the back of his victory in a recent Florida straw poll. They also follow on remarks made by Representative Michele Bachmann on Saturday during a speech on illegal immigration in Iowa, in which she also advocated a border fence.

It is not the first time that Mr. Cain has floated the idea of an electrified fence. He has told the story many times of a caller to his former radio show who chastised him for talking about building a border fence, saying that such an idea was impractical. Mr. Cain often says he told the caller that he had recently returned from China, and if the Chinese could build the Great Wall then America could build a border fence.

Last summer, after President Obama remarked that some Republicans seemed to want a moat filled with alligators in addition to a fence, Mr. Cain responded by saying that he would indeed add an alligator-filled moat to his proposed fence, which would be topped with electrified barbed wire.

In his remarks on Saturday, Mr. Cain appeared to go a step further. Speaking to a rally sponsored by the Roane County Tea Party, Mr. Cain said that part of his plan would be to “secure the border for real” with a fence.

“It’s going to be 20 feet high. It’s going to have barbed wire on the top. It’s going to be electrified. And there’s going to be a sign on the other side saying, ‘It will kill you — Warning.'” At an earlier rally, on the campus of Tennessee Tech University in Cookeville, Tenn., he added that the sign would be written “in English and in Spanish.”

“This nation has always been a nation with wide open doors,” Mr. Cain said at the second rally. “We want to make it easy for people to come through the front door. And we’re going to shut off the back door so you don’t have to sneak into America.”

If he'd stuck with that, he might have been the first black Republican president.