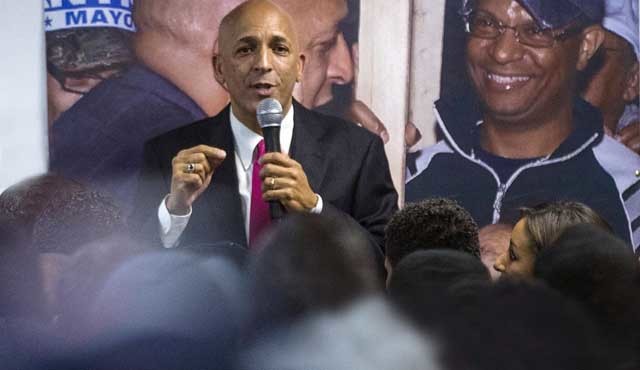 The greatest challenge when writing for VDARE.com is all the juicy details we are forced to omit. You can only include so much in one article, and this is especially true in my piece on Mayor William Lantigua of Lawrence, Massachusetts.

I could have included many other facts in the piece, some comical and others deadly serious. For example:in an apparent attempt to gain public sympathy last spring, Mayor Lantigua, above, claimed that two men in a speeding car tried to "run him down" in front of City Hall. But the Lawrence police investigated the matter and concluded that the mayor fabricated the entire incident.

Beltre, who had previously been busted for auto insurance fraud, asked the arresting officer if she could make one cellphone call to  Guess who?-her "good friend" Mayor William Lantigua.

More seriously, an illegal alien from the Dominican Republic recently murdered a woman and her two teenage children in their Lawrence home. According to police, the man claimed that he was being "yelled at by his girlfriend and kids in their apartment. When he got tired of hearing them yell and complain he pulled out a .357 handgun and shot all three."[Accused killer: 'I shot until there were no more bullets, By Jim Patten, EagleTribune.com, September 7, 2011]

I could go on, and on, and on. But I think you get the idea.

Lawrence is only a 15 minute drive from the New Hampshire border, and maybe 30 minutes from Manchester, where all the GOP campaigns are based. Every New Hampshire voter around here knows about Lawrence, especially since some of its residents like to "visit" New Hampshire from time to time.

Moreover, Gov. Deval Patrick and Boston Mayor Tom Menino continue to stubbornly oppose Secure Communities, despite the recent wave of immigrant crime sweeping the state. Indeed, Mayor Menino even recently said that Grand Theft Auto was a "minor crime" that should not be considered a deportable offense.

This is a gift. What are they waiting for?