Deportation sob stories are quite the thing for the mainstream media in the Age of Trump — so easy to write and dripping with liberal virtue. One illegal alien family hit the jackpot on Thursday with a front-pager in the San Francisco Chronicle and a similarly emotive story in the San Jose Mercury-News. Did the deportables hire a publicist or is La Raza helping them out for free?

According to the Chron caption regarding Maria Mendoza-Sanchez, a Trumpian deportation order is “tearing her family apart” — when in fact the couple’s lawbreaking entrance is to blame. 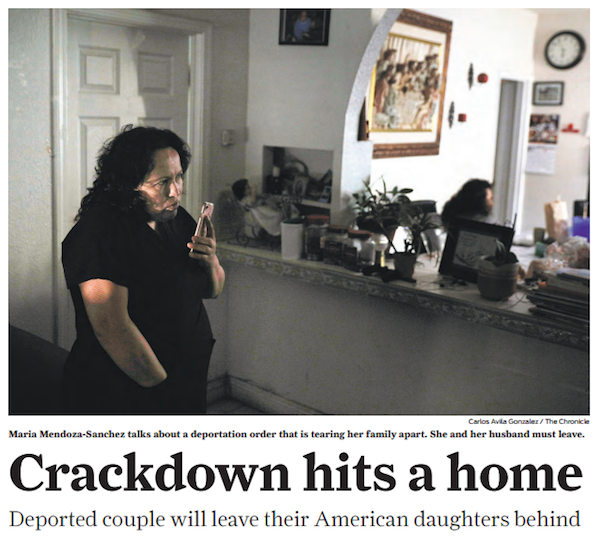 “I just want to say to people: I’m not here in the country to take anything away from anybody,” said Maria, who arrived in 1994 not speaking a word of English, then enrolled in classes to learn the new language.

“My husband has always worked, he does not get himself in trouble,” Maria said, reciting her family’s values and history. . . .

And, Maria said, “I do the best I can to make a difference in the lives of my patients.”

That last line highlights another point — how does an illegal alien get a job as a nurse (!) at Highland Hospital, a public institution operated by Alameda County? California really has gone far down the drain.

By holding that job, Maria’s declaration that she doesn’t “take anything away from anybody” is shown to be a lie. She stole that job from an American citizen or legal resident who is supposed to have it.

And what is so terrible about living in Mexico, which is one of the world’s richest countries (#11 by GDP in 2017)?

If the Mexicans stayed home and worked for political reforms instead of scampering north, the nation could certainly be improved. Being located next to the US has been a curse for Mexico’s progress because immigration has allowed its ultra-wealthy to live like princes.

So Maria Sanchez can focus her considerable energies into making Mexico better rather than mooching from Americans.

Although President Trump ran on a platform of rounding up and deporting “bad hombres,” Oakland nurse Maria Mendoza-Sanchez knew that she and her husband — who each lack legal status — would not be protected by their clean records.

“I knew that not only our life but the life of many immigrants was going to change completely,” said the mother of four as she recalled the night of the election. “I knew this is going to be a totally different story now.”

Nearly seven months later, her fears have been realized.

On May 23, immigration officials told the couple they had three months to make arrangements to leave for the Mexican homeland in which they last set foot 23 years ago. On Tuesday, they will reluctantly split up their family, flying to Mexico with their 12-year-old son to start a new life, while leaving their three older daughters — who are 16, 21 and 23 — behind in the U.S.

In the past, Mendoza-Sanchez’s background likely would have spared her from deportation. She’s the mother of three native-born U.S. citizens and one recipient of the government’s Deferred Action for Childhood Arrivals program. She owns a home in Oakland, has no criminal record, and works as a nurse in the cardiology and oncology wing of Highland Hospital. . .