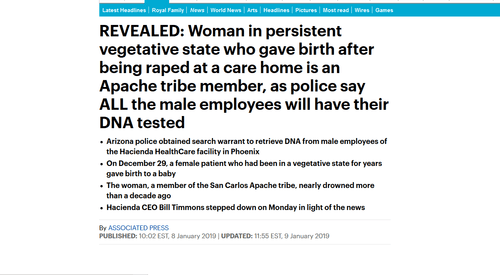 It was originally reported that the woman allegedly impregnated by black male nurse Nathan Sutherland was comatose, like Uma Thurman in the movie Kill Bill, where Thurman  is the victim of rape and attempted rape by white male attendants. (In Hollywood, they have to be white.)

A report says that she isn't comatose, quite, and in the process  reveals something we are frequently not told about rape victims—her race.

A lawyer for the family of an incapacitated Arizona woman who gave birth in a long-term care facility said she is not in a coma as previously reported. The Arizona Republic reported Friday that attorney John Micheaels said the 29-year-old woman has "significant intellectual disabilities" and does not speak but has some ability to move, responds to sounds and is able to make facial gestures.

Phoenix police have said the woman was the victim of a sexual assault and have disclosed little other information. A Jan. 8 statement by San Carlos Apache Tribe officials said the woman, a tribal member, gave birth while in a coma.

The woman, who has not been publicly identified, had been described to CBS affiliate KPHO-TV as being in a vegetative state at the facility where she spent many years. "The important thing here is that contrary to what's been reported, she is a person, albeit with significant intellectual disabilities. She has feelings and is capable of responding to people she is familiar with, especially family," Micheaels told the newspaper.

In the interests of decency, the names of rape victims are withheld from the press, partly by the courts, partly by the MSM. In the process,  the fact that a black man convicted in a string of rapes may have only raped white women is suppressed. But that's okay with the MSM, because they want it suppressed.

The Daily Mail was the only news source I could find to take this important fact and put it in the headline.