The junior class of Cosumnes Oaks High School in Elk Grove, California, ordered up some special sweatshirts to mark their year of graduation, 2014. The design they chose was a Roman numeral of the number 14, which is also associated with the Mexican Norteno gang, a fact the kids did not know.

So now local police have warned the students that wearing the sweatshirts in the wrong neighborhood could get them assaulted.

Below, the school sweatshirt shown can be hazardous to a student’s health because of the diverse immigration of criminals from Mexico. 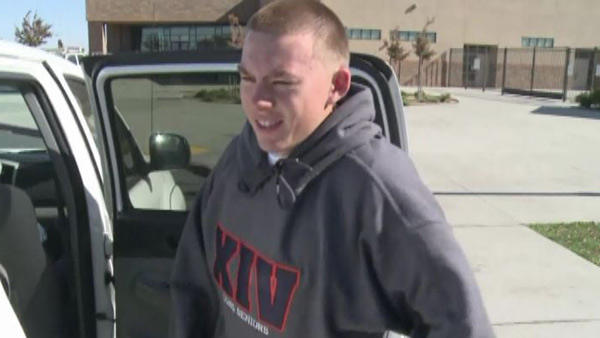 Diversity is our strength (or so liberals say), except when foreign gangsters violently object to American kids showing their school spirit.

ELK GROVE, CA (KXTV/CNN) – The class of 2014 at one school has run into a problem with their senior sweatshirts. Police warn it could be dangerous to wear them in public.

Some parents call it a harmless sweatshirt for the class of 2014, but others say the roman numerals XIV have a deeper meaning.

“You wear that on the street, you’re going to get your a** kicked!” parent Anna Trejo said.

“Those are the symbols for a Hispanic gang,” Det. Sgt. Luis Aguilar of Sacramento County Sheriff’s Gang Unit said.

Fourteen is often associated with the Nortenos, a gang with strong roots in northern California.

“I feel like we all are kind of fearful,” one student said.

“Every year our senior class designs a sweatshirt, and for their theme this year, the class of 2014 this year went with a Roman theme,” Elk Grove Unified School District’s Liz Graswhich said.

“It was vetted by a number of people, but those individuals did not know about the connection,” Graswich said.

“That’s baloney,” Trejo said. “I mean, really? You got the cops up here. I mean, they even know it.”

“I’ll be honest with you, I would not let my kid wear that outside the house,” Aguilar said.

Aguilar, who has been with the police’s gang unit for nine years, said if a child is wearing the sweatshirt in the wrong neighborhood, he or she could be looked at as a gang member.

“We are going to put out a letter in the next day or so and let parents know it has been brought to our attention, and if they would like a refund, they are welcome to it,” Graswhich said.