Mexicans Are Eating American Horses (after Cruelly Slaughtering Them) 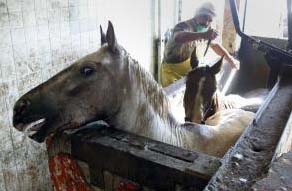 As I wrote in "They Kill Horses, Don't They? (Mexicans, That Is.)", 10 percent of Mexico's stock of horses are slaughtered for food. In America, all horse slaughterhouses have been closed, but business is booming in Mexico.

The photo shows how horses being slaughtered in Juarez are stabbed in the back until the spinal cord is severed, after which they are hoisted up and their throats are slit.

Animal rights activists launched a major campaign Thursday to pressure Congress for legislation that would prohibit the export of horses to Mexico and other countries for slaughter.

The campaign, months in the making, includes grisly video of horses crammed into cattle trailers and hauled to a Mexican plant where they are slaughtered with knives.

"This is not how Americans want their horses treated," said Nancy Perry, a vice president with the Humane Society of the United States. [Activists urge Congress to ban horse exports for slaughter, Houston Chronicle 10/5/07]

See the Humane Society's coverage about the cruelty of Mexican stockyards: Investigation Reveals Inhumane Treatment of Horses Shipped to Mexico for Human Consumption. The organization supports the American Horse Slaughter Prevention Act (S.311/H.R. 503), which would prevent the export of US horses for slaughter.