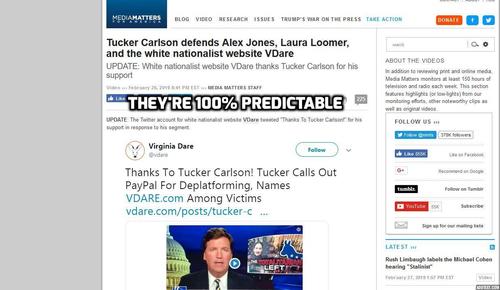 Last night I noted that Tucker Carlson, talking about deplatforming and definancing by PayPal, had named us as one of the victims.

There was a clip of this from Columbia Bugle on Twitter:

I wrote "If that clip is slightly incomplete, don't worry. Full details and transcript will be available from Media Matters shortly, paid for by George Soros's pre-tax dollars."

This turned out to be true within the hour.

TUCKER CARLSON (HOST): Start with our foundational freedom, speech. If they can tell you what to say, you are not free. There is nothing they can't make you do. That's why the founders put it first. It's the freedom that comes before all others. The left has spent decades trying to weaken the First Amendment. They've done in the sneakiest way possible by creating phony hate speech exemptions out of thin air.

So far the courts have not accepted this idea, the idea that you can limit speech because someone else doesn't like it. So the left has a new plan now. They've allied with big corporations to make it impossible for people who say the wrong things to make a living in this country. You may have heard of a company called PayPal. It's an online payment platform, the biggest. If you want to make money online, and many people do, PayPal is essential.

Like most on the left what Shulman actually wants is utter conformity, a world where only approved opinions are allowed. Last year PayPal banned Alex Jones from using its platform for saying things they didn't like. They've also banned anti-Muslim activist Laura Loomer, the publication VDare and a number of other people and organizations whose speech they believe should be silenced. Shulman admitted that his company takes guidance on who to ban from Southern Poverty Law Center. That's an entirely fraudulent organization that works as an arm of the Democratic National Committee.

The Shulman mentioned above is the CEO of PayPal, recently featured in a WSJ story about who he's deplatforming:

I regularly transferred money to relatives overseas using @Paypal. Last fall, I was mysteriously blocked from doing so and still am. Repeated calls to Paypal have gotten me no answers. Am I paranoid to think this is the reason? https://t.co/5lUhdcXAa1