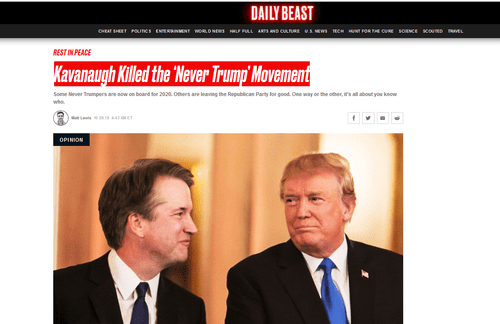 Never-Trump cuckservative Matt Lewis, a guy who used to work at the Daily Caller and now works at the Daily Beast, tweets about mobs and civility:

When Lewis  talks about fighting the evil people on his own side, he's tallking about people like us here at VDARE.com. Before he was NeverTrump, he  was NeverImmigrationEnforcement, and NeverDerbyshire in 2012, when Derb was fired from NR. Basically,he's never anything un-PC.

See past Lewisiana from VDARE.com here:

Now he's noticing the same thing I noticed when I wrote The Kavanaugh Hearings Have Redpilled Neocons, Mainstream Conservatives, And Never-Trumpers.

Some Never Trumpers are now on board for 2020. Others are leaving the Republican Party for good. One way or the other, it’s all about you know who.

Resistance is futile. Long on life-support, the Never Trump “resistance” movement within the Republican Party was finished off by the Brett Kavanaugh confirmation fight.

Consider the dichotomy that has emerged in the last week: We saw people like Erick Erickson, who once wrote a piece headlined “I Will Not Vote For Donald Trump. Ever,” suggesting they will vote for Trump in 2020, and people like Tom Nichols, formerly of The Federalist, saying Kavanaugh’s confirmation was the final straw (he quit the GOP).

Nichols and Erickson reacted to the exact same news in exactly opposite ways.

The Kavanaugh hearing essentially radicalized Never Trumpers. Some—as part of the GOP base’s backlash against the left’s attacks—are coming home and supporting Trump. Others—perhaps because their hatred of Trump has only intensified—were pushed completely from the fold. This process has been going on for a long time, but one gets the sense that the fight over Kavanaugh was the end of the road.

“It turns out that shared dislike for Donald Trump does not a political cause make.”

Where you stand on this probably depends on where you sit. Personally, I see the group who submitted to their Trumpy fate as making an understandable submission to the inexorable forces of tribalism and partisanship. Consider Erickson’s plight. If you are a conservative, you, too, might well be repelled by the left’s behavior last week.

As Erickson writes, “Trump is neither an ambassador for my values nor the articulate champion of my principles I would prefer. But he is a safe harbor in a progressive storm that seeks to both destroy my values and upend our constitutional republic.”

Even if you don’t like Donald Trump, seeing Ted Cruz get chased out of a restaurant by an angry mob—or watching protesters scold and lecture normal Republicans like Susan Collins and Jeff Flake—can spark an expected backlash. (Note to liberals on Twitter: The proliferation of comments like: “Don’t let any Republican politician have any comfort. Chase them out of restaurants. Picket in front of their houses. Shame them!” is counterproductive.) [More]

Not only counterproductive, but criminal. And are Flake and Collins really "normal" Republicans? Collins is a far Left as you can go and still be a Republican, and Flake boasts of having used illegal labor on his family farm.

But he's right that "shared dislike for Donald Trump does not a political cause make.” It would help to have actual principles, or loyalty to your country or your party or something, none of which NeverTrumpers seem to have.

Lewis ends his column by saying that Trump has won, and will therefore be renominated in 2020.

"For some reason, things keep falling into place for him. Sometimes, it’s better to be lucky than good. "

Ah, but Trump is good. And if he's lucky, he's luckiest in having enemies like Matt Lewis.