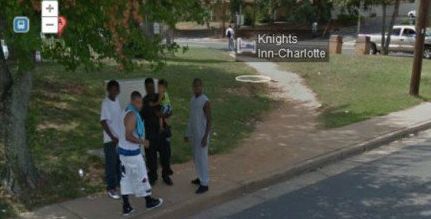 John Fund, in NRO’s Corner, reports a distressingly dangerous condition for the political correspondents of National Review and other MSM hacks at the Democratic National Convention:

The DNC shines the spotlight of the world stage on our Queen City. Delegates from all 50 states, 15,000 journalists, and more than 350 foreign leaders will experience Charlotte . . .

— Charlotte Business Journal, August 31, 2012 I can’t speak for the delegates or the foreign dignitaries, but many of the journalists I have spoken with here are appalled at the accommodations in Charlotte to which they were assigned by the DNC. National Review was assigned to two Knights Inn properties. Everyone who saw them fled immediately across state lines to an available Marriott in South Carolina rather than stay there. As one of our political correspondents reported:

The Knights Inn was the worst hotel I have ever seen, and I’ve stayed in many bad motels in my life. Two guys were dealing drugs in the room next to me, and a prostitute was working out of the parking lot. And this was in the early afternoon. The room itself was dirty, full of other people’s stuff, etc.

I have never requested a hotel change in 3 years at NR. This was the first time I felt absolutely compelled.

It’s not as if the DNC couldn’t have figured out something was wrong with the properties. TripAdvisor had these recent comments on one of the Knights Inn properties: “wouldn’t recommend it to my worst enemy,” “scared to death,” and “pimps and prostitutes at night.” Nor was National Review singled out. Staff members from Politico and the Hill abandoned their assigned hotels, too. Staffers from the Hill found refuge in a cheap Microtel and considered it a comparative oasis. Tucker Carlson, editor of The Daily Caller, told me that the Quality Inn his staff was assigned to was “the worst hotel you can imagine.” TripAdvisor carried these recent reviews: “barely a Bates Motel,” “scary area and parking lot,” and “the worst.” Some of the scarcity of good hotels is due to Charlotte’s relatively small size. It is the least populous city to host a national convention since the GOP held theirs in New Orleans in 1988, and the Big Easy had lots of hotels because of its popularity with tourists. But there really is no excuse for anyone, especially women, to be assigned to hotels that are beyond dingy and in some cases clearly unsafe.

There is a word unmentioned by Mr. Fund, the anonymous NRO staffers, and Tucker Carlson as quoted by Fund. That word is “black.”

NRO’s staffers were being asked to stay in a black motel, in a black area, with black pimps and prostitutes.

The zip code, NC 28217, is a majority black area. The criminals, crack addicts, and people fighting are almost certainly black. (The owners aren’t. One reviewer says “The people behind the desk don't speak a lick of English and don't seem to have a problem when you tell them and their god-awful no-tell motel to go to hell.” Probably Patels. )

And here is a picture, from Google Street View, of some black youths hanging around on the street corner near the motel. 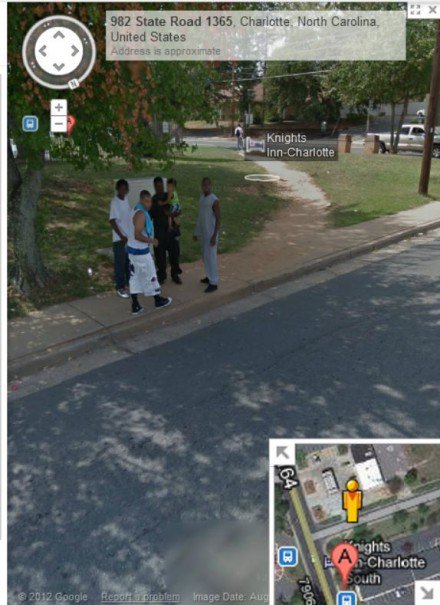 I’m sure if Obama had a son, he’d look like at  least one of these kids.

All this is because Charlotte itself is a fairly black city—35 percent black. It’s on Wikipedia’s List of U.S. cities with large African American populations.

Charlotte’s new mayor is also black—a Democrat named Anthony Foxx. The city government’s attitude to the American Renaissance Conference led Nicholas Stix, in a post titled City of Charlotte, NC, to Whites: Drop Dead, to call Charlotte a “black supremacist stronghold”, with a black Chief of Police as well as a black mayor.

That’s presumably why the Democratic Party, itself a largely black, and black-dominated, institution, chose Charlotte for the renomination of their black presidential candidate.

But you can see why John Fund, the nameless NRO staffers (including, presumably, Jonah Goldberg) and Tucker Carlson would feel endangered.

They were simply following the wisdom of John Derbyshire, in his much denounced column The Talk: Nonblack Version [TakiMag, April 05, 2012], the column that got him fired from National Review.

(10b) Stay out of heavily black neighborhoods.

(10f) Do not settle in a district or municipality run by black politicians (10i) If accosted by a strange black in the street, smile and say something polite but keep moving.

The pundits in question obviously kept moving until they crossed the state line. However…none of these frightened people defended John Derbyshire when he was fired.

John Fund defended Naomi Riley when she got “Derbyshired” but with no reference to the precisely similar case of Derbyshire himself. [Censoring Naomi Riley| She was fired for having the courage to state the obvious, May 12, 2012]

Tucker Carlson’s Daily Caller piled on to Derbyshire here: No sympathy for the Derbyshire  By Matt Lewis, April 7, 2012.

And other NRO staffers now in Charlotte, including Daniel Foster and Jonah Goldberg, attacked Derbyshire as well.

No doubt now, having escaped from a lower-class black motel by the skin of their teeth, they will be willing to admit that they were wrong.