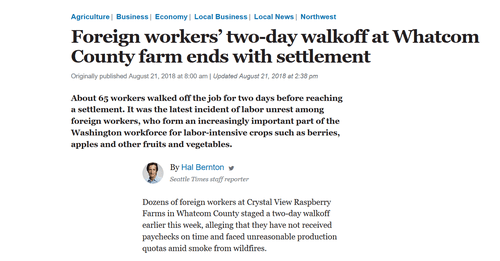 On Saturday, 65 H-2A guestworkers from Guatemala and Mexico walked off their jobs of picking raspberries at Crystal View Raspberry Farm in Whatcom County, Washington. Whatcom is just across the "other" border from Canada. The workers allege, among other things, that the owner was requiring them to meet unreasonable production quotas and that they were not being paid on time.

About 65 workers walked off the job for two days before reaching a settlement. It was the latest incident of labor unrest among foreign workers, who form an increasingly important part of the Washington workforce for labor-intensive crops such as berries, apples and other fruits and vegetables.

Raspberries are at their peak right now. Seriously, if they do not get picked, they will rot in the fields. Going on strike right now is a big deal but the quotas may have been onerous. The workers have returned and the laid off workers have been rehired. No formal complaints were filed. But digging deeper, there may be more to this story.

Who is the owner of Crystal View Raspberry Farms? Gurjant Sandhu. He is probably from the Punjab. Sikhs from the Punjab in India are numerous in Whatcom County. Southern British Columbia abounds with Sikhs. They are identifiable because many of the men wear turbans.

I live south of Whatcom County. I see them regularly driving tractor-trailers on and off the ferries.  Doing an Internet search, one finds that Sandhu is a name from the Punjab. Mr. Sandhu is most likely an immigrant from India.

And, doing an Internet search again of Crystal View Raspberry Farms, it appears that Mr. Sandhu, owner of said farm, has other difficulties following regulations. He has been pumping other residents' water to do more irrigation than he is permitted. He was heavily fined for doing so. [Whatcom berry farmer appeals $102K in fines for illegal water use, By Kie Relyea, Bellingham Herald, February 05, 2017]

Considering the history of Mr. Sandhu's disregard for following the rules, he probably is violating workers' rights. But hey, the slaves are back picking so the raspberries will not rot in the fields. What would we do without our raspberries?

Alas, the guestworkers will have to pick in heat and air pollution because of smoke from fires in British Columbia. See a "local" water view below.

We Americans need our fresh raspberries so this just has to be.