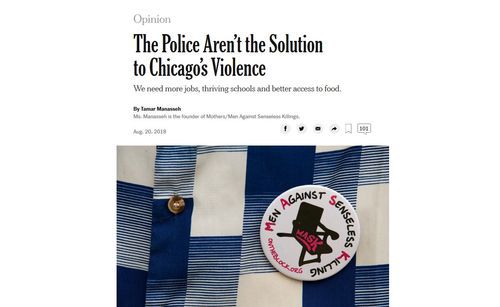 The New York Times is going to keep running opeds on how the wave of shootings in Chicago since the triumph over the cops of BLM in November 2015 are the fault of the Usual Suspects (cops, white supremacy, white men, Trump, systemic racism, etc etc) until somebody comes up with a semi-persuasive sounding one. Today … “food deserts” are to blame:

The Police Aren’t the Solution to Chicago’s Violence

Yup, Chicago killers are D’Jean Valjeans shooting people to steal a loaf of bread for their families.

That’s what happens when you eliminate schools and allow food deserts to exist: People who can afford to move will do so, and the people left behind will be over-policed.

In less comic criminology, American Affairs recounts how Harvard political scientist James Q. Wilson stunned the intellectual world in 1974 by pointing out that whether or not prison rehabilitates criminals and whether or not the threat of prison deters criminals, we can say with a high degree of confidence that being locked up in prison incapacitates street criminals from preying on civilians on the street for the length of their terms. This observation then slowly led to a reassessment of the spirit of the age that had cut imprisonment during a vast increase in crime.

Incarceration as Incapacitation: An Intellectual History
by Timothy Crimmins

[Larry] Auster’s insight is evergreen. Just follow the pronouns. For example, in this article:

“That’s what happens when you eliminate schools and allow food deserts to exist.”