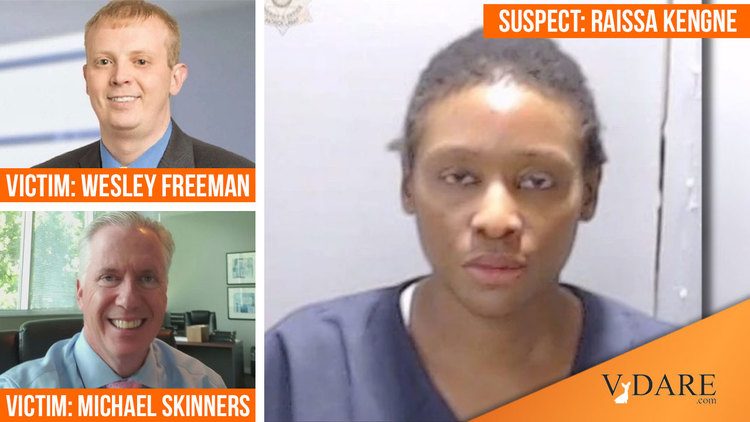 News of a ”mass shooting” in Atlanta no doubt stirred hopes in the minds of gun controllers that it would be a nationally promotable story about a white male ”racist.” No such luck—the shooter was a black female:

It turns out, however, that she is a racist.

ATLANTA — The woman arrested in connection with the Midtown Atlanta shooting appears to have known the victims who were killed. A third person was also injured in the shooting.

On Tuesday, the Fulton County Sheriff’s Office released a mugshot of the suspect, who they now confirm is Raissa Kenge [sic].

On Monday, officials with MARTA sent a memo to their employees warning them of a suspected shooter Monday afternoon. The name in that memo matches a name listed in a job discrimination lawsuit filed last year. 11Alive also found that both of the victims who died were listed in the documents.

[Suspect identified in deadly Midtown shooting, may have known the victims, by Hope Ford, 11Alive, August 23, 2022]

Both of the victims who died were white males. The woman was Raïssa Kengne, which is a Cameroonian name, suggesting she’s an immigrant, although she went to college in Georgia.

The two dead, alleged to have discriminated against her, were white males. The wounded man is named Mike Horne, probably a white man also.

I was severely retaliated against and constructively discharged. My home was broken into. My life and my family lives were threatened. […] Furthermore, BDO USA’ employees and partners leverage their relationship with people living in my condominium in order to pursue the retaliation at my home.

In a legal document, Kengne reportedly said she faced “retaliation, persecution, harassment, intimidation, threats, burglary, computer hacking” after noting a “significant deficiency” in an audit that her employer disregarded. She is also suing several 1280 West management team members and the 1280 West board members in Fulton County Superior Court for “withholding the plaintiff’s mail, including mail from Georgia Power.”

The allegation that the white males who worked at her condominium had committed burglary and stolen her electric bill sounds like typical paranoia.

A reminder: what we call a Disgruntled Minority Massacre is  when a member of a minority group shoots up their white coworkers, employers, or ex-employers—after complaining of ”racism.” (Sometimes the MSM investigates the deceased for ”racism,” to see if, as Steve Sailer puts it, they ”had it coming.”)