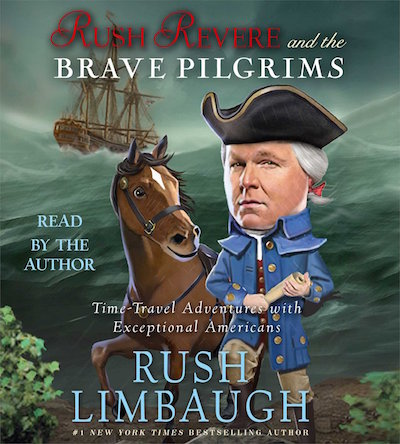 I happened to click on Rush Limbaugh on Friday just in time to hear him chirp happily about publishing one of his patriotic Rush Revere kid books in Spanish. He has written several books about the American Revolution designed to interest the kiddies aged 10 and up in history and promote patriotism to counteract the anti-American poison they get in public school — an excellent project. But now he is going language diversity.

Wait, isn’t Limbaugh the guy who claims to be the defender of traditional America and its culture? One of the main cultural weapons of hispanic foreigners is forcing Americans to speak Spanish because of their refusal to learn English. The aim is to transform the United States into a bilingual nation with Spanish having an equal place to English. The process consists of gradually normalizing Spanish into American culture and making citizens forget how hard they fought against bilingual education.

We can see how well bilingualism has worked out for Canada, with a simmering secessionist movement in Quebec. The same thing could easily happen to the American Southwest, and raza activists work toward that as a goal. Language is a big part of reconquista.

Limbaugh declares himself to be the Mayor of Realville because he rejects liberal fantasies of society and instead embraces the truth, whatever it is. So he says.

But he is hardly realistic about language as a cultural weapon against America. Limbaugh actually says that his book will help assimilate newcomers by allowing them to read about America’s founding in Spanish. Hello? The normal process of assimilation occurs through learning English first so a whole universe of American literature then becomes available. Is Limbaugh losing it? He has always been squishy on immigration, but this is a step into surrender: Don’t bother learning English, immigrant kids, you can observe American culture from the comfort of Spanish, no effort required, with the help of El Rushbo.

RUSH: Ladies and gentlemen, I mentioned this to you some time ago, and then it went dormant because I had to wait for the day to be able to tell you. The day has arrived. When Rush Revere and the Brave Pilgrims, the first in a series of children’s books, ages 10 to 13, on American history first book came out, immediately people said, “You’ve got to make this book available in Espanol.”

And then the second book in the series came out, the third book in the series came out. And each time a new book came out people clamored for more, demanding more. Kids calling, “Will there be another Rush Revere book? I want more of Liberty,” blah, blah, blah. In each case we’ve always been able to answer in the affirmative and I told you that we’re working on a Spanish version of these books. And I’m here to tell you that we have pulled this off, and it is no mean feat. It’s taken quite a while to make this happen. I’m not gonna bore you with all of the things that we had to do. I’m not talking about concessions.

You have to convince people there’s a market for it. But we are here to announce that onJune the 9th we will be releasing Rush Revere and the Brave Pilgrims, the first book in the adventure series, in Spanish. Our hope is that newly arrived legal immigrants coming to the United States will be able to learn the positive and incredible story of the founding of the greatest country on earth in an accurate and fun, involved way.

Rush Revere and the Brave Pilgrims overwhelming, universally popular, even among adults. We’ve had stories from people who’ve read these books — again, they’re targeted to ages 10 to 13 — who say they learned things in these books that they didn’t know, people that are parents and grandparents age. It’s been a rewarding thing, as you know. I’ve spent a lot of time talking about these books, using the vehicle of time travel to be able to take students back to seminal events in American history and put them there and enable them to talk with people like Benjamin Franklin, John Adams, George Washington, I mean, the whole shebang.

And to have the books available in Spanish is something we were urged to do almost from the get-go, and so here we are. Rush Revere and the Brave Pilgrims, Spanish edition, will be perfect for bilingual American families that want their kids to further their Spanish language skills while at the same time learning the true story of American history and being a part of exciting adventures.

So essentially we’re participating here in an effort to assimilate people into the American culture via American history and the American way of life. Really proud of this, folks. Really, really proud of this. We’re gonna be posting special announcements on June the 9th on Facebook, on all of our websites. They’re gonna start in very limited quantity in Barnes & Noble, Walmart, Amazon. You might have to search a little to find these. This is part of the marketing thing that we’ve been going through here, but we are expecting great things.

Since so many people had been asking, I just wanted to let you know that we have succeeded here and are able to make the announcement. So June 9th the first book, the inaugural book in the Rush Revere series, Rush Revere and the Brave Pilgrims available in Espanol.