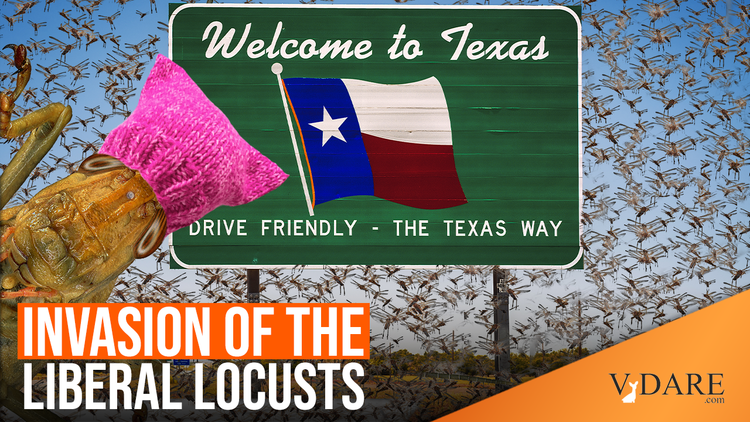 Liberal Locusts: Leftist Californians Flee From The Consequences Of Their Policies, Vote For Them Again

We don't just need a wall to prevent immigration from Mexico. We need walls to prevent hostile migrants from transforming states within this country.

While the prospect of Texas as a swing state may shock those who associate the state with George W. Bush, it shouldn’t surprise anyone paying attention to its politics over the last decade. While Barack Obama lost Texas by 16 points in his 2012 re-election bid, in 2016 Hillary Clinton closed that gap to single-digits. Two years later, Democrat Beto O’Rourke lost to incumbent Republican Sen. Ted Cruz by less than three points.

The improving performance of Texas Democrats tracks well with the exodus of Californians into Sun Belt states over the past two decades. Since 2008, more than 700,000 Californians have moved to Texas, at first propelled by the Great Recession and later by their home state’s increasingly untenable cost of living.

Henson warns it’s seductively reductionist to attribute Texas’ rapid statewide purpling simply to California expats. When you factor in the number of Texans that have moved to California over the last decade, the net political effect on a state with 29 million people is less progressive tidal wave and more trickling blue-ish tributary. With a rising Latino population and growing metropolitan areas, Texas’ internal demographic shifts have combined with out-of-state immigration (not just from California) to alter its politics.

Here, Texas is suffering from a one-two punch. First, mass immigration has turned the far south of the state into essentially an extension of Mexico. Second, many Californians fleeing "the cost of living" don't connect the dots between what they are fleeing and the policies they support. Or, perhaps they do and relish in destroying communities before they leave again.

As Steve Sailer has pointed out, limiting immigration is an important part of Affordable Family Formation because it limits the cost of housing. However, "free market" Republicans set themselves a trap. They provide low taxes, economic incentives, and opposition to unions to attract businesses. Unfortunately, many of those businesses are Woke Capital.

These corporations want more foreign worker visas, socially liberal values, and funding for various multicultural schemes. Thus, the California of Ronald Reagan and Richard Nixon, once the middle-class paradise, is now a Third World state with an extremely wealthy class and an extremely poor helot class. Common institutions, even something as simple as streets and sidewalks, can no longer be maintained. There's no middle class to care about it. The GOP in this area hasn't become more culturally conservative in response, but doubles down on "pro-business, free market" rhetoric, which, of course, few actually want. The result is an overcrowded, poorly run state with one-party rule and extreme wealth inequality.

Few who flee the once Golden State seem to have learned from their experience. Just as Massachusetts refugees transformed Vermont, California is colonizing Texas ['New' Vermont Is Liberal, But 'Old' Vermont Is Still There, by Micah Cohen, New York Times, October 1, 2012]. Idaho too may fall [No Californians Need Apply, by Tony Senik, City Journal, November 14, 2019]. Once those areas are ruined, the liberals will move on, having sucked dry the social capital in these areas. They are akin to the locust-like aliens from Independence Day.

What can be done? Aside from staunching the bleeding by limiting foreign immigration, state legislatures should pass laws so new residents must live in the state for a designated number of years before they are allowed to vote. The Supreme Court would probably throw out that law, but let's have that fight. Texas has a right to split into several new states, thus providing a way for some Texas Republicans to maintain their way of life. Splitting California up (and/or recreating the state of Jefferson) should also be explored.

Of course, all of this is secondary to the main problem. The Republican Party needs to think seriously about Affordable Family Formation and put the interests of its voters ahead of the interests of its donors. It may be incapable of doing that. The GOP's own creed is leading it to electoral suicide. Hopefully, something new can emerge out of the ruins, regardless of what happens in a few weeks.