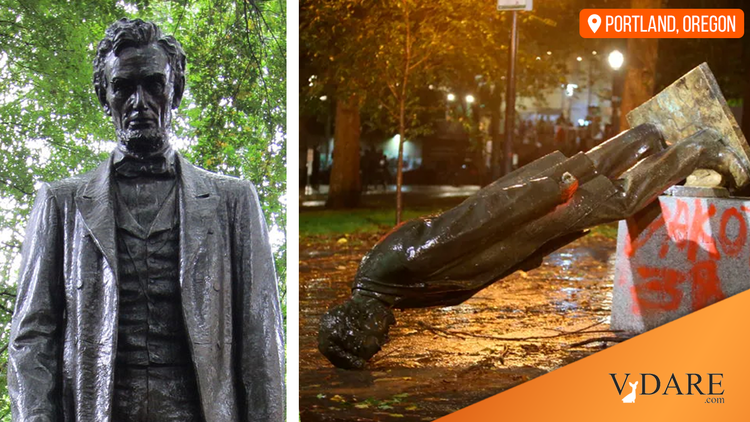 Sean Ono Lennon: Why Was a Lincoln Statue Toppled in Portland?

Can someone explain why it appears a Lincoln statue was toppled in Portland? Asking for a friend.

Maybe Antifa tore down Abraham Lincoln’s statue for Columbus Day due to the speech Lincoln delivered at the White House to 14 Indian chiefs about how Indians should stop hunting and raiding and settle down to farming liked we pale-faced people do.

“You have all spoken of the strange sights you see here, among your pale-faced brethren; the very great number of people that you see; the big wigwams; the difference between our people and your own. But you have seen but a very small part of the palefaced people. You may wonder when I tell you that there are people here in this wigwam, now looking at you, who have come from other countries a great deal farther off than you have come.

“We pale-faced people think that this world is a great, round ball, and we have people here of the pale-faced family who have come almost from the other side of it to represent their nations here and conduct their friendly intercourse with us, as you now come from your part of the round ball. …

“We have people now present from all parts of the globe—here, and here, and here. There is a great difference between this palefaced people and their red brethren, both as to numbers and the way in which they live. We know not whether your own situation is best for your race, but this is what has made the difference in our way of living.

“The pale-faced people are numerous and prosperous because they cultivate the earth, produce bread, and depend upon the products of the earth rather than wild game for a subsistence. This is the chief reason of the difference; but there is another. Although we are now engaged in a great war between one another, we are not, as a race, so much disposed to fight and kill one another as our red brethren.

“You have asked for my advice. I really am not capable of advising you whether, in the providence of the Great Spirit, who is the great Father of us all, it is best for you to maintain the habits and customs of your race, or adopt a new mode of life. I can only say that I can see no way in which your race is to become as numerous and prosperous as the white race except by living as they do, by the cultivation of the earth. …”

I died from this reply.