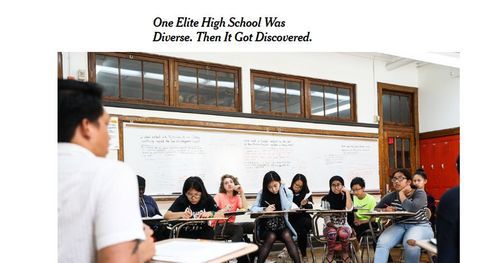 NYC Schools: The White Menace vs. the Asian Ho-Hum

One Elite High School Was Diverse. Then It Got Discovered.

At some of New York City’s elite high schools, racial diversity is an issue. At the Brooklyn Latin School, it was considered a core part of the school’s identity.

For years, Brooklyn Latin was the most diverse of the city’s specialized high schools, which admit students based on a single test. In 2013, a quarter of students at the school were black, and 15 percent were Latino. That same year, at Stuyvesant High School, just 33 out of almost 3,300 students — or 1 percent — were black, and 77 students were Latino.

But in recent years, racial diversity at the Bushwick, Brooklyn, high school has been in steady decline. This school year, the incoming class of students at Brooklyn Latin is 13 percent black and 10 percent Latino, and the school has become increasingly white and Asian.

White and Asian or Asian and white?

The article won’t tell you the white vs. Asian breakdown at this school, so I found the NYC Department of Education’s page for 2017:

Asians outnumber whites by more than three to one.

In general, the huge story in NYC public schools in this decade has been the tidal wave of Asians. But that’s not part of the Narrative, so Asians get kicked down to playing non-Diverse little brothers to the relatively rare white students, who are portrayed as either shamefully white flighting away from diversity or shamefully resegregating diverse schools by culturally appropriating them.

Founded in 2006, Brooklyn Latin is one of five, smaller specialized high schools opened during the Bloomberg administration, with the idea of expanding access to the city’s best schools. (I graduated from the school in 2014.)

2014? I hope you are getting paid for this article, which is up to the usual NYT standards on this subject, and not getting ripped off just because you are an intern and it’s National Intern Day:

… The newer schools generally require slightly lower scores on the Specialized High Schools Admissions Test, or SHSAT, to earn a seat, and Brooklyn Latin has had the lowest required cutoff score since opening. …

A 2013 U.S. News and World Report article ranked Brooklyn Latin as the top public school in New York State, suddenly exposing it to a wider audience.

Teachers said they began to see a change almost immediately.

“I noticed that there are more white students and more East Asian students at our open house events,” said Jennifer Snyder, a Latin teacher at the school. …

Some, like Clara Park, a recent graduate, said that the diversity of the student body helped make those debates more constructive, and gave her a chance to hear points of view she otherwise might not have been exposed to.

“Participating in seminars helped broaden the perspectives of other students,” said Ms. Park, who is Korean-American and is going to Yale University in the fall. “I think that going into college, I am more prepared to deal with ideas that I have never faced before.”

By the way, this is a nearly universally expressed idea in respectable society: that without adequate numbers of Diverse blacks and Latinos in each classroom, the non-diverse Other would never ever be exposed to views, such as the need for demographic Diversity to assure diversity of ideas, that are also constantly reiterated by teachers, principals, college admission essay consultants, mayors, newspapers, TV, and the Supreme Court.

Think of it this way: if we don’t have intimidating numbers of the Diverse in each and every classroom, some student might dare to express a dissenting opinion questioning if Diversity really ensures we hear diverse views, and that cannot be allowed. Without enough Diversity constantly monitoring each classroom, some horrible child somewhere might express a diverse view on the wonderfulness of the Emperor’s Diverse Clothes, subverting our complete unanimity on diversity.