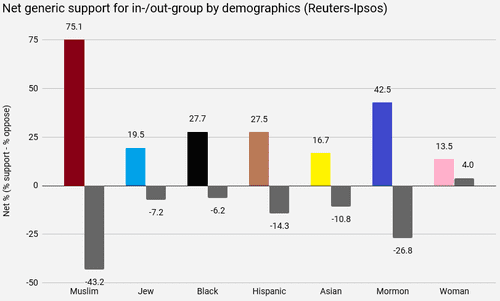 Identity Politics Is The Present And Even More So The Future

The following graph juxtaposes expressed hypothetical support for a candidate who is X but who is otherwise generic (ie nothing is known about his or her political orientation, partisan affiliation, etc). The first bar for each X, displayed in a color based on my editorial discretion, shows net support (% more likely to support - % less likely to support) among respondents who are themselves X. The second bar for each X, shown in grey, shows net support among respondents who are not themselves X. 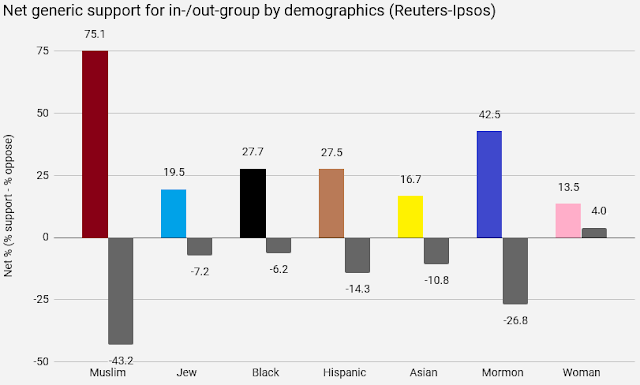 Without knowing anything else about a hypothetical candidate beyond his or her sex, race, or religion, people who share that sex, race, or religion are substantially more likely to support him or her while people who do not share the demographic characteristic in question are more modestly less likely to do so (with the exception of men, who are marginally more likely to support a female candidate because she is female than oppose her because she is female).

The late Lee Kuan Yew for the win:

Islam is the most divisive identity. The gulf is so wide among Muslims and dhimmis that even Conservative, Inc has its fair share of people who don't want the West taking in more exploding Muhammads.

Sex, in contrast, is the least divisive one. As Steve Sailer is fond of saying, there is simply too much fraternizing with the enemy for most men and most women to be at each others' throats.