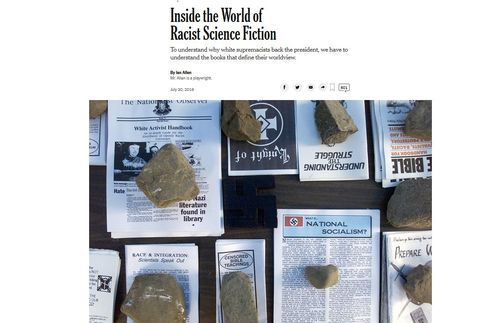 Leftist Sees Paranoid Fantasies In "Racist" Science Fiction, But Those "Fantasies" Are The Current Reality

So a fellow you’ve never heard of has written an amusing piece for The New York Times about “racist science fiction.”

What’s amusing? The writer, Ian Allen, who runs some sort of theater “collective” called “The Klunch” in Washington, D.C. doesn’t seem to understand that that most leftist fiction retails paranoid fantasies in the same manner as “racist” science fiction writers.

Included in the Allen canon is “Laura Bush Killed A Guy.” I’m going to go way out on a limb and state that Allen has no plans for “Ted Kennedy Killed A Girl,” or “Bill Clinton Raped A Woman.”

Anyway, read this fellow’s rumination for yourself, and take note of one particularly if unintentionally droll comment:

In “Bedford: A World Vision,” another futuristic novel, abortion is encouraged, old people are euthanized and legally regimented political correctness has cowed Caucasians into submission [Inside the World of Racist Science Fiction, July  31, 2018].

I don’t know if that is intentionally funny, but supposing it isn’t, imagine that: a world where “abortion is encouraged, old people are euthanized and legally regimented political correctness has cowed Caucasians into submission.”

Is Ian kidding us? That isn’t science fiction. That’s Planet Earth, 2018, and if he doesn’t know that, he might try getting his head out of the collective and picking up a newspaper. He might read about James Damore.

Of course, “paranoid fantasies” from the alt-right underground are nothing like the mainstream leftist paranoid fantasies about evil white rapists and businessmen, which the book trade and Hollywood have been spewing since, oh, I don’t know, Harper Lee imagined Tom Robinson right up to John Grisham’s Carl Lee. Perhaps he never saw Elysium.

Here is the description of that sci-fi film at Wikipedia:

Leftist paranoid fantasy? Nope, that type of material is “social commentary.” Only when it comes from anyone to the right of Fidel Castro is it “paranoid fantasy.”

As for Allen himself, a look at his photo tells all. Incel?