November 2012 may be a year and a half away, but pre-election Hispandering keeps clicking up in intensity. The President naturally had a big celebration for Cinco de Mayo (as did GW Bush), with happy talk about amnesty, with Obama mentioning the DREAM Act specifically.

The President plans a jaunt to the border city of El Paso on Tuesday to deliver a speech supporting comprehensive amnesty.

But another item, flying largely beneath the radar, is the proposal for a Latino Museum to be constructed on the National Mall. The President may not have the votes for a mass amnesty to create millions of future Democrats, but he can certainly marshal tax dollars for pander projects, like a museum to glorify Hispanic immigrants and illegal aliens.

The list of persons to be honored is short, so one might think that a smallish inexpensive building would suffice, but no, $600 million is the price tag, half of which is to be taken from the unwilling American taxpayer. You would think we have plenty of spare cash to blow on ethnic fluff instead of being $14 trillion in the hole. The 2010 election was certainly an expression of the voters that Washington curtail spending on non-essentials, but the administration has a different idea.

The Latino Museum has its own website of course, with a YouTube stating that ”America is not just a nation, it is a rich tapestry of diverse cultures.” It further propagandizes that the US has been niggardly in recognizing the many (unnamed) contributions of Hispanics. Millions of illegals driving down the wages of citizens is somehow seen in a positive light by proponents, along with Hispanics’ famously high dropout rates, crime and other social dysfunction.

Giving over a portion of our special national space for an expensive building to celebrate diversity and illegal immigration does not honor our heroes who fought to preserve our sovereignty from foreign foes.

Below, the World War II Monument on the National Mall in Washington, DC. 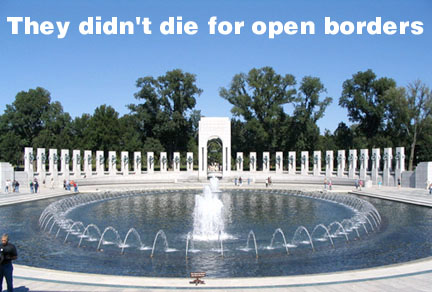 Reporting from Washington– A federal commission has recommended construction of a museum on the National Mall honoring the history of American Latinos.

The commission submitted a report to Congress and the White House on Thursday outlining the details of the proposed $600-million National Museum of the American Latino, which has been endorsed by Interior Secretary Ken Salazar.

It would be part of the Smithsonian Institution, which already has a museum dedicated to American Indians and is planning another focusing on African Americans.

”Part of America’s story that has not been told completely – that has deep missing gaps – has been the story of the Latino contribution to this country,” Salazar said in an interview.

Under the proposal, half of the $600 million for the American Latino museum would come from private fundraising, and the rest would be provided by Congress.

The museum would highlight contributions of Spanish-speaking people to more than 500 years of American history. The report points out that the Spanish were the first Europeans to interact with Native Americans and that they founded St. Augustine, Fla., 42 years before Jamestown was established. Latinos explored the American West before Lewis and Clark and founded many U.S. cities.

Its collections would also acknowledge the presence of Latinos in the military in addition to featuring Latino contributions to art, culture and society. Labor activist Cesar Chavez, Baseball Hall of Fame member Roberto Clemente and former Coca-Cola Chief Executive Roberto Goizueta would likely be featured.

The most recent census data shows that Latinos, at 15.8% of the population, are the largest minority group in America.

In 1994, a report to the Smithsonian titled ”Willful Neglect” criticized the institution for failing to represent Latinos in museum collections and in hiring practices.

One possible reason for the underrepresentation is a stereotypical view of Latinos as foreigners, said Allert Brown-Gort, associate director of the Institute for Latino Studies at the University of Notre Dame.

”Even though Latinos are one of the oldest population groups in the United States, because of immigration in the last couple of decades, they’re seen as being all newcomers,” Brown-Gort said. ”This country has had a long history of Latinos – otherwise we wouldn’t have places called Los Angeles.”

But not everyone is happy about the proposed site of the museum, at Pennsylvania Avenue near the Reflecting Pool and the Capitol.

Judy Scott Feldman, president of the National Coalition to Save Our Mall, a group that advocates for the protection of the National Mall, says that she is in favor of efforts to better tell the story of American history, but that adding more buildings to the mall isn’t always a positive move.

”The concept of the mall is rooted in the founding of the nation and the Constitution,” Feldman said. ”You’ve got the Capitol and the White House, and what’s in the middle? The public promenade. The mall was the great public space, the expression of the power of the people in American democracy. But what’s happening is we’re building all over it.”