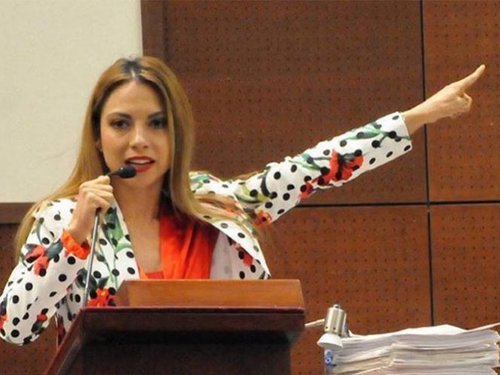 In the Mexican state of Zacatecas, a young female representative in the state legislature publicly defended Donald Trump and said that Mexicans in the U.S. cause problems.

Her name is Iris Aguirre Borrego, and she belongs to the Partido EncuentroSocial, a small political party most of whose members are evangelical Christians.

What did she actually say?

Here’s what Representative Aguirre said on the floor of the Zacatecas legislature (my translation, video below):

You [another legislator] say that the United States would lose much if they send the Latinos to their place of origin. It’s sad to recognize that the leaders of the United States are arriving to extreme decisions in the sense that the problems caused by the Latinos in that country have been very shameful. They are making extreme decisions because sadly, the Mexicans are involved in very shameful things in the United States, of which we could name many.  I believe that the Mexicans want to take advantage of the supermarkets [probably referring to theft]. The Mexicans have a bad reputation. Sadly, these are the consequences.

I’m sure that if the U.S. applies the law, it will benefit them to have a social order.  That is something we haven't been able to do here. Apply the law. Educate the citizenry. Instruct the citizens…

It’s President Trump’s responsibility to make a decision as to what to do with the Latinos and the Orientals. [This probably refers to Asian illegals, who are problem in Mexico, too.] He is going to make the decisions…

Trump is a dyed-in-the-wool American that the Americans needed, somebody like him....he can put in order the principles of the country that they are losing.

Her remarks were all over the news, she was under attack, she was dubbed “Lady Trump” by the media.  Her  little speech was repudiated by her own party leadership and there was talk of her being punished by the party.

You have to realize that party discipline in Mexican political parties is much tighter than in the United States. Also, she is a plurinominal representative. She was named to the legislature by her party, based upon the percentage her party received in the election. That means she could easily be removed next time around at the latest.

Two days later, Iris Aguirre appeared on an talk show (click here to view it) in which she contradicted almost everything she’d said and claimed that she herself had been a migrant in the U.S.

A day or two after that, Representative Aguirre appeared at a press conference where she said

“…I want to apologize to all those who were offended by my commentaries that I did not express correctly. I recognize my mistake in erring, in not expressing the idea that I really felt in my heart and that still exists: that of helping the migrants.”[ Se disculpa Iris Aguirre Borrego, luego de sus declaraciones. Sale huyendo de la conferencia de prensa Claudia Belmontes, Zacatecas TresPuntoCero, November 26, 2016]

There were also two representatives of her PES party present, and according to them there’s going to be an “investigation” of what she said and that she still may be expelled from the party.

In a Mexican political context, her remarks were very courageous, and I think she meant what she said. But she buckled under the enormous pressure. And yet, her political career may be over anyway.

What she could have done is refuse to apologize and cast the blame on the Mexican government for using the U.S. as its safety valve all these years.