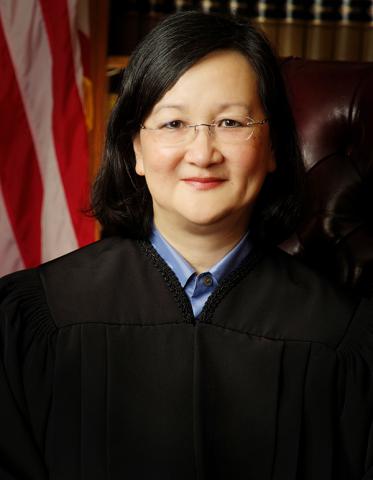 The anti-democratic Cultural Marxist Left is looking to a radical kritarch, a judge who thinks she is a political ruler, one Dolly Gee of the United States District Court for the District of Central California, for its next onslaught on America. Gee, the daughter of Chinese immigrants and an Obama nominee, has a long history of mandating benefits for illegal aliens, including ordering free lawyers for illegal aliens, something specifically banned by an Act of Congress. Having already rendered a preliminary decision in favor of illegal aliens who were being detained, Gee is expected to issue a final decision soon that may end all detainment—and create a major issue in the 2016 presidential campaign, assuming the Stupid Party notices [Court ruling on immigration could rock Obama, 2016 race, by Emily Cadei, Newsweek, May 19, 2015]

The Left has targeted one of the few remnants of immigration law enforcement by campaigning against the detainment of Central American illegal alien minors and their families [Democratic lawmakers tell Obama to stop ‘jailing’ migrant children, moms by Franco Ordoñez, McClatchy DC, May 21, 2015]. Of course, there’s already a campaign against detaining illegals in general, but now we are being told doing anything about the endless flood of Central American “refugees” who continue to rampage across the border isn’t just wrong, but against the law. [Influx of Central American Teen and Family Arrivals Continues, by Jessica Vaughan, Center for Immigration Studies, March 31, 2015]

And, as usual in these cases, the legal basis for the Left’s claims is thin.

The law is quite clear: Congress authorized the detention of illegal aliens without regard to age or parental status in the amended Immigration and Nationality Act (INA). The Illegal Immigration Reform and Immigrant Responsibility Act of 1996 reads:

"APPREHENSION AND DETENTION OF ALIENS

"SEC. 236. (a) ARREST, DETENTION, AND RELEASE.-On a warrant issued by the Attorney General, an alien may be arrested and detained pending a decision on whether the alien is to be removed from the United States. Except as provided in subsection (c) and pending such decision, the Attorney General-

"(1) may continue to detain the arrested alien…;

"(3) may not provide the alien with work authorization (including an ' employment authorized' endorsement or other appropriate work permit), unless the alien is lawfully admitted for permanent residence

Note that not only are all aliens subject to detention, but they are prohibited from receiving employment authorization.

Yet the Left claims a legal settlement made during the Clinton Administration in the case Flores v. Meese outweighs the law. The case was sparked by a young illegal alien, Jenny Lisette Flores, who was detained by INS after entering the country illegally. In the lawsuit that resulted, the Supreme Court “found that the release procedures did not violate the minors’ substantive or procedural due process rights, and that the Attorney General was acting within his discretion”. [Flores v. Meese Case, Center for Human Rights and Constitutional Law, Accessed June 5, 2015] The case was then remanded to a district court.

However, incredibly, the Clinton Administration settled the case and established a precedent for the treatment of illegal alien minors. As the Center for Human Rights and Constitutional Law notes:

It requires that juveniles be held in the least restrictive setting appropriate to their age and special needs to ensure their protection and wellbeing. It also requires that juveniles be released from custody without unnecessary delay to a parent, legal guardian, adult relative, individual specifically designated by the parent, licensed program, or, alternatively, an adult who seeks custody who DHS deems appropriate.

Needless to say, the "Center for Human Rights and Constitutional Law" is a Leftist group that wants to apply this settlement to all illegal alien minors today. Yet even this interpretation mentions nothing about adults—and it explicitly mandates that juveniles “be held.”

However, the settlement claimed to set out “nationwide policy for the detention, release, and treatment of minors in the custody of the INS and shall supersede all previous INS policies that are inconsistent with the terms of this Agreement [Flores v Meese Agreement, August 12, 1996].

A settlement can’t trump the laws set by Congress, but that’s precisely what the advocates of mass immigration are claiming.

It gets worse. The new campaign is trying to apply this already mistaken settlement not just to illegal alien minors, but to adults. For example, The New York Times Magazine is calling not just for illegal alien minors to be released but parents as well. Specifically, it condemns George W. Bush for denying “Flores protections to refugee children traveling with their parents” [The Shame of America’s Family Detention Camps, by Wil S. Hylton, February 4, 2015].

The NYT seemingly mocks DHS for asking for time to screen the detainees for possible threats to national security. Of course, many of these “minors” are actually teenagers who are known gang members and actually do pose a threat [Known gang members among thousands of illegal immigrant children storming the U.S. border and officials are now trying to silence officers from talking to the media, by Ashley Collman and Ryan Parry, Daily Mail,June 14, 2014]

Astonishingly, the NYT claims “Studies have shown that nearly all detainees who are released from custody with some form of monitoring will appear for their court date,” meaning a hearing before EOIR. Yet contrary to Hylton’s claim, more than 91% of the Central American surge of illegal aliens have not appeared for their scheduled hearing. [Contrary to Administration Claims, Only a Tiny Fraction of ‘Surge’ Border-Jumpers Deported, by Jessica Vaughn, Center for Immigration Studies, December 24, 2014]

More importantly, few of the illegal alien family groups have been detained after initial processing, and the few actually detained have been subsequently released. Additionally, the border surge illegal aliens neither reported to the DHS after their release as required, nor appeared at their EOIR hearings. And we can guess this was all part of the Obama Regime plan.

And the way is being prepared by sob stories like the one in the New York Times Magazine. Thus Hylton writes:

A door in the back opened to reveal dozens of young women and children huddled together. Many were gaunt and malnourished, with dark circles under their eyes. “The kids were really sick,” Brown [an immigration lawyer] told me later. “A lot of the moms were holding them in their arms, even the older kids — holding them like babies, and they’re screaming and crying, and some of them are lying there listlessly.”

But actually these Central American “refugees” are receiving $30 million living quarters so outrageously opulent that even the hapless Republican Congress was investigating it. “Detention” consists of luxuriating in de facto hotels filled with murals, education, food, toys, and recreation, a veritable Club-Fed for illegal aliens they can enjoy before eventually being released.

What’s the solution? We can do what the Reagan Administration did in 1988 by swiftly shutting off the flood, holding quick hearings at the border, and deporting illegals. This is not the first Central American “surge,” but if it is handled properly, the GOP Congress could ensure it is the last.

The Republican Congress can also mandate and expand Expedited Removal.

These simple tactics would resolve the problem and force the Democrats into an embarrassing position.

Of course, the Republican Congress also needs to start impeaching some of the judges who think they can simply throw out legislation they don’t like.

And that’s only a first step. The real way to solve the problem is to go to the source—impeach the lawless President who set this disaster in motion.