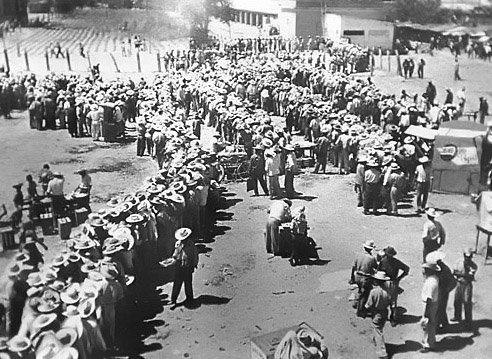 It's great news that Donald Trump cited President Eisenhower's Operation Wetback (without using the term) in part of the SIXTY MINUTES interview that CBS, not surprisingly, chose not to broadcast last Sunday. I thought this Eisenhower feat was one of a number of immigration tricks Trump left on the table in his obviously restrained performance in the September 16 debate.

It's also very striking that CBS talking head Scott Pelley clearly had absolutely no idea what Trump was talking about. When pressed on deportation, Trump set him up by asking (1:47 on the video) "Did you like Dwight Eisenhower as a President at all?" Pelley blusters stupidly "Well, I wasn't around during President Eisenhower's Administration..." before unguardedly agreeing: "He was a great American." Trump then springs the Operation Wetback trap: "He did this, with over a million people," adding helpfully "a lot of people don't know that." Pelley changes the subject.

George Will obviously doesn't know it either. Funny thing, I discussed it on pages xiv, 34, 35, 260 of  my 1995 (!) book Alien Nation (which Will actually offered to blurb or support in a column, before reneging). There are scores of references to Operation Wetback on VDARE.com, dating back at least as far as 2000.

Sometimes it crosses my mind that the MSM elite is just dumb.

But even though CBS buried Trump's point, the MSM managers apparently feel the need for damage control: Donald Trump’s ‘humane’ 1950s model for deportation, ‘Operation Wetback’, was anything but, by Yanan Wang [sic], Washington Post, September 30, 2015. Wang is particularly upset that

In Mexicali, Mexico, temperatures can reach 125 degrees as heat envelops an arid desert. Without a body of water nearby to moderate the climate, the heavy sun is relentless — and deadly.

During the summer of 1955, this is where hundreds of thousands of Mexicans were “dumped”

He (she or it) does not mention that this is the desert the illegals chose to cross to get into the U.S.

He (she or it) does quote this final exchange between Trump and Pelley:

He (she or it) has a problem with that?