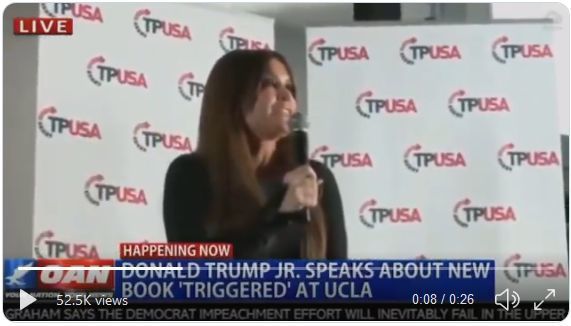 In an appearance with Turning Point USA founder Charlie Kirk at UCLA Sunday, Guilfoyle, who dates Don Jr., made the event worse. She bragged about how many minority women are opening up businesses to a crowd of disgruntled young nationalists. When those same nationalists started demanding Kirk reinstate the canceled Q&A section of the event, Guilfoyle insulted them as un-dateable losers. [Donald Trump Jr. went to UCLA to decry ‘triggered’ liberals. He was heckled off the stage by the far right., by Katie Shepard, The Washington Post, November 11, 2019]

Kimberly Guilfoyle is talking about "women of color" opening businesses, and the crowd is drowning her out chanting BUILD THE WALL

Stop telling us what we should want! Listen! 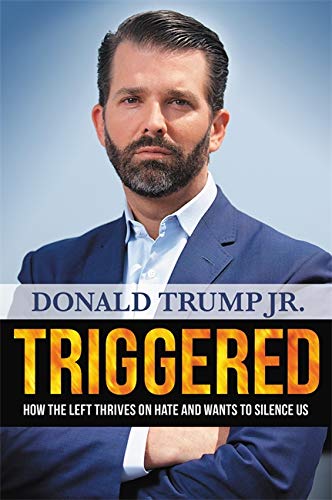 “Let me tell you something, I bet you engage and go on online dating because you’re impressing no one here to get a date in person,” she screamed at the crowd as they chanted “Q AND A.” That’s a terrible response to those who just want to ask tough questions about how Kirk and Don Jr. uphold immigration patriotism.

Throughout the appearance, Guilfoyle talked over Don Jr. She did the same when both appeared on The View last week. In that appearance, the former Fox News host counter-signaled her boyfriend. She said there was no “finer human being” than John McCain and chastised Don Jr. for sharing an article that named the White House “whistleblower.” [Kimberly Guilfoyle concedes: Perhaps Trump Jr. wasn’t ‘prudent’ in tweeting whistleblower’s name, by Martha Ross, The Mercury News, November 7, 2019]

It’s bizarre that Guilfoyle appears alongside Don Jr. for almost all of his book promotions. She didn’t help write his book, nor does she share most of his beliefs. Sources tell The Watcher she’s included in all publicity events because she shares the same publicists as Don Jr. She’s clearly trying to elevate her own brand and not that of her boyfriend’s.

Don Jr. should realize that his girlfriend is not helping him sell books. He’s the main attraction and he should leave her at home. This is his book, not hers.