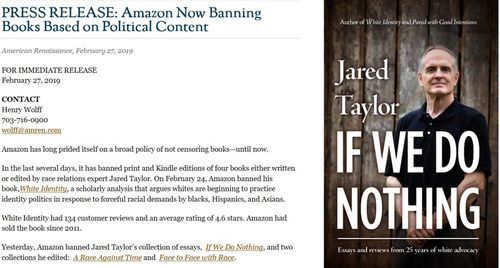 In de-platforming news this week, Amazon is now no longer selling books that present a dissident perspective.

The de-platforming here is not total, though you have to think that "not" should probably be "not yet." As of this morning, March 1st, Paul Kersey's books are still available: the one titled Stuff Black People Don't Like, and the no-punches-pulled books about the decline of American cities like Detroit, Baltimore, Chicago, and Birmingham.

You can still buy Colin Flaherty's book White Girl Bleed a Lot on Amazon, but for some reason not his other book Don't Make the Black Kids Angry, which I think is Colin's best-seller. Jim Goad's book Whiteness: The Original Sin, a landmark in Anti-anti-white Studies, which I am currently reading with pleasure and instruction, is still for sale on Amazon.

Amazon's coverage of Jared Taylor's books is a bit peculiar. They actually have pages for only two of Jared's books: the one on Japan he published in 1983, and the 1992 book that first brought Jared to my attention, title: Paved With Good Intentions: The Failure of Race Relations in Contemporary America. The way it came to my attention was, I saw it reviewed in National Review, to which I was a subscriber. The reviewer was some guy named … let me see … Pe-ter Brim-e-low, I think that's right.

Jared's later books, including his latest, the 2017 title If We Do Nothing, have no Amazon pages. They've been scrubbed. And yet—here's the peculiar thing—if you go to Amazon's Jared Taylor page, it gives a potted biography of the author that includes a list of his books. The list also omits If We Do Nothing, but it includes Jared's 2011 title White Identity: Racial Consciousness in the 21st Century—for which there is no Amazon page!

What a mess! The most parsimonious explanation here is that the Winston Smiths at Amazon—the guys in charge of stuffing politically-incorrect books down the memory hole—just aren't yet very good at their job. One has to assume they'll get better with practice, and that five or ten years from now Amazon will be perfectly cleansed of any books containing Bad Thoughts. Amazon will then be white as the driven snow … although that is of course not quite the right simile here.

It goes without saying that the anti-white rants of authors like Cornel West and Ta-Nehisi Coates are available for purchase on Amazon; not to mention, as Henry Wolff points out over at American Renaissance, The Anarchist Cookbook, Osama bin Laden's justification of terrorism, and black nationalist manifestos by the likes of Louis Farrakhan.

I predict things will get worse before they get better. Quote from a report at FIRE, F-I-R-E, the Foundation for Individual Rights in Education. The report was published in January last year. Quote:

I don't know which is more disturbing: that educated young people are less tolerant of hate speech than Americans at large, or that the bogus, dishonest, totalitarian concept of "hate speech" is now common currency.

That's where we are, though, and to judge by that difference between young college students and Americans at large, we're headed deeper into the darkness.