Allah’s thugs in the Boko Haram gang have been marauding through Nigeria, mass-murdering and kidnapping school girls along the way to be forced to convert to Muslims and become sex slaves of jihadists, a common practice of Islam. In fact, the Boko violence has caused Nigeria to postpone its upcoming presidential election which was scheduled for February 14. More than 6000 civilians were killed by Boko jihadists last year.

Most of the 270 schoolgirls kidnapped in April of last year remain in Boko hands, despite the silly hashtag campaign of Michelle Obama and others to “Bring Back Our Girls.” The White House has moved on to other concerns now, as it pretends that Islam is just like any other religion and isn’t populated with psychokillers.

Boko Haram has declared a caliphate in the part of Nigeria it controls. 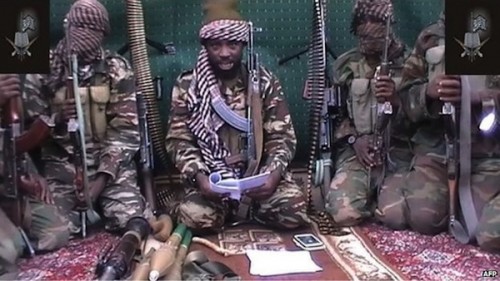 However, a few girls have managed to escape their captors, and provide insight into Boko Haram’s particular flavor of Islamic barbarity, hinted at by the group’s name, which means “Western education is sin.”

It’s been more than 300 days since Islamic terrorists with the group Boko Haram snatched more than 270 girls from a boarding school in Nigeria in the dead of night.

Despite a worldwide outcry and military action, most of the girls are still missing. But some have managed to escape.

“They told us that if we do not convert to Islam they will slit our throats. They asked the healthy ones to perform the (Islamic) rites while we, the sick ones, did not perform the rites,” 15-year-old Abigail John, who was held by Boko Haram for more than four weeks, said.

John was among three girls who recently escaped from Boko Haram. She had worried she would never see freedom again.

“The way they spoke to us, they had no intention of releasing us,” she said. “They said we would be married off as soon as we got well and that they would marry us to their members who were single. We never thought we would regain our freedom.”

Twenty-year-old Dorcas Aiden was held captive for two weeks last September. She admitted that she denied her Christian faith and pretended to become Muslim, to stay alive.

She described what she witnessed in captivity.

“They are teaching (girls) Islamic (religion), some say they are married, then they are saying that they are training them (to fight),” she said.

The local priest, Father Maurice Kwairanga, has been helping these girls.

“(For) some of them it’s very painful for them to go through this process of even telling what happened to them,” he said. “But gradually, they are able to open up and to talk freely, to feel accepted and to feel that the world has not turned its back on them.”

At least 219 girls are still missing. The fight with Boko Haram killed more than 6,000 civilians in last year.