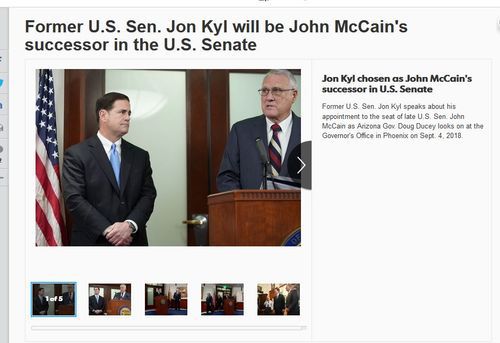 Ex-Arizona Senator Jon Kyl has been appointed to the Senate seat  previously filled by John McCain. Kyl has a NumbersUSA rating of B, based on his 1995-2013 Senate service, which is better than John McCain's rating. McCain had an F- rating for the most recent Congress. Kyl had a weak moment during the 2007 Amnesty push, when he supported a Bush-McCain-Kennedy Amnesty bill—after winning relection in 2006 as a hardliner.(Emphases added below.)

Angry calls poured into Senator Jon Kyl’s office this week by the thousands, expressing outrage beyond anything he said he had witnessed in his 20-year political career. The callers were inflamed by Mr. Kyl’s role in shaping the bipartisan immigration compromise announced May 17, which lawmakers continue to debate.

“Yes, I have learned some new words from some of my constituents,” Mr. Kyl, an Arizona Republican, said at a news conference on Thursday, drawing titters from those in the room.

Mr. Kyl, 65, who garners top ratings from conservative groups every year, is the unlikely linchpin to the fragile alliance of Democrats and Republicans trying to push the sprawling immigration bill through the Senate.

Labeled by its backers as the “grand bargain,” the measure has the potential to be the most far-reaching piece of domestic legislation taken up by the Senate this year.

Although the bill’s backers have praised Mr. Kyl for his political courage, his about-face was not ushered in by either a high-minded refusal to demagogue on the issue or a conscious summoning of historic compromises from the Senate’s past.

A technocrat who has labored in Arizona in the shadow of his much more visible colleague, Senator John McCain, Mr. Kyl has traditionally shunned the spotlight and worked behind the scenes immersed in the details of legislation. It was that affinity for working in the trenches on policy, and pragmatism about the art of legislating, that led him to become a legislative partner of Senator Edward M. Kennedy, the Massachusetts Democrat who has been a major voice for immigration overhaul.

After winning a bruising re-election battle last November in which immigration featured prominently, Mr. Kyl said he returned to the Senate convinced that something needed to be done on the issue. Inaction was no longer an option, he said.

“The situation in Arizona is horrible today,” he said in an interview.

As I've said repeatedly, it's not necesary for politicians to see the light as long as they feel the heat. I hope Kyl has learned that the people he's representing in Arizona don't want Amnesty.