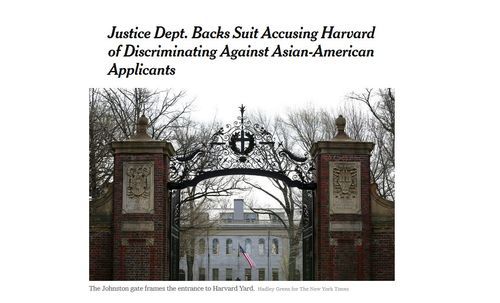 In a court filing on Thursday this week—to be precisely technical about it, a "statement of interest"—Jeff Sessions's Department Of Justice ruled that Harvard University has failed to demonstrate that it does not discriminate on the basis of race in its admissions policies.

The context here is a 2014 lawsuit by Students for Fair Admissions, which describes itself as "a nonprofit membership group of more than 20,000 students, parents, and others who believe that racial classifications and preferences in college admissions are unfair, unnecessary, and unconstitutional."  The group is suing Harvard for discrimination against Asian-American students.

Harvard has offered a neat riposte. [Hundreds of experts, scholars back Harvard in admissions suit, By Colleen Walsh, Harvard Staff Writer, The Harvard Gazette,August 31, 2018] The Asian-American population of the U.S.A. is less than six percent, they point out, while Harvard's class of 2021 is 22 percent Asian-American. How can that be discrimination against Asian-Americans?

Answer: It can be if, on a purely meritocratic basis, Asian-Americans would be more than 22 percent.

Which they indisputably would be. At CalTech, for example, where admissions are as meritocratic as we know how to make them, Asian-Americans are 43 percent. That's not just a bias to STEM subjects, either: at Berkeley, which is likewise meritocratic, last fall's admissions were 42.2 percent Asian-American.

This is a circle that cannot be squared. Different races present different statistical profiles on all kinds of abilities, including cognitive ones. The reasons for this are rooted in evolutionary biology. Our currently regnant ideology in the Western world is that this is not so: that given the right social and educational interventions, all races would present identical statistical profiles.

We—we in the Western world—are living a lie. This is not a matter of right versus left, or of moral versus immoral, of good versus bad. It's a matter of ideology versus reality.

It follows that for a stable, harmonious society you want to have a supermajority of one race. A society with big minorities of different races—and to judge from the Asian-American case, more than five percent is big enough to cause problems—is going to exhibit disparities in outcomes. The only way to counter those disparities is to put a big fat thumb on the scales, which of course is what Harvard is doing.

I sometimes find myself idly wondering what it's like to live in a country that does maintain a supermajority of one race: China, Japan, Finland, Korea, Iceland. Those places aren't perfect, I'm sure—in the case of North Korea, way not perfect—but there is a whole set of issues they don't have to bother with, presumably freeing them up to deal with other problems.

The U.S.A. was in that blessed company sixty years ago. To a good approximation we were ninety percent white, ten percent black, others at trace-element level. Blacks were treated unfairly in a lot of precincts, to be sure: but there was a growing willingness among whites to own this problem and do something about it.

Might we have made some fair, sensible, realistic accommodation between whites and blacks if we hadn't opened the borders and veered off into multiculuralism and ideology? I guess we'll never know.