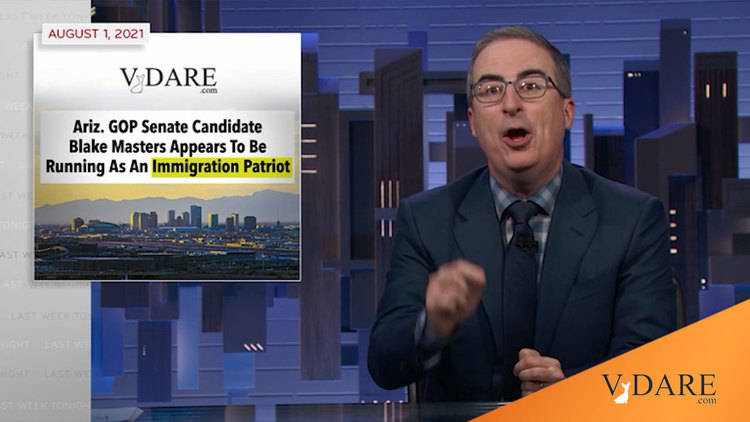 British-born comedian/pundit John Oliver (a dual UK/US citizen since 2019) is a Leftist who hates Republicans. His latest effusion, attacking all kinds of freedom-loving candidates in Arizona, includes this attack on Blake Masters and us:

Wait until you hear about his everything else. Because Masters is a Peter Thiel-backed self-described conservative nationalist. And since Trump's endorsement, things have started to surface about him like this audio from a podcast that appeared on back in April.

”We do have a gun violence problem in this country and it's gang violence. Right? Gang gangs, it's people in Chicago, St. Louis, shooting each other. Very often, you know, black people, frankly.”

Okay, blaming black people for gun violence in America is just outrageously uncreatively racist, but also, it's unsurprising from someone who and this is true, was called an “Immigration Patriot” by the white nationalist website VDARE, which praised him saying he checks all the right boxes, and “He's an immigration patriot who checks all the white supremacist boxes” just isn't what you want to hear about a man running for office. You don't even want to hear it in a Sex in the City voiceover: “That night Charlotte met Blake who was an immigration patriot who checked all the boxes, and I couldn't help but wonder ‘Aren’t we all just searching for our white knight?’”

This is what Steve Sailer calls the "point-and-sputter" method of argument. He shows no evidence that we're (a) white nationalist and (b) white supremacist except, perhaps, that we've praised Blake Masters, and no evidence that Masters is evil except that he's aware of America's enormous black gun violence problem, and perhaps that he's been praised by us, the kind of thing I've been calling "guilt by non-association" for years.

Also, the piece where we said Masters checks all the boxes—of immigration patriotism, not "white supremacy"—is this one: Ariz. GOP Senate Candidate Blake Masters Appears To Be Running As An Immigration Patriot, August 1, 2021. That's almost a year old.

You'd think if someone was attacking Masters for being praised  by us, they'd notice that we've also praised his factual "Black people, frankly" remark about the black gun crime which has been causing carnage in cities for years, and worsening after the Floyd Riots.

Masters, of course, is right that it’s black people behind the crime wave. FBI crime data shows that blacks were responsible for 56.5% of all murders in 2020 where a suspect was identified. The true number is probably higher when accounting for unsolved murders. The media branded Masters a racist for simply stating this obvious truth.

That's in article about  the Great Replacement:

We developed this chart for my 1995 book ALIEN NATION. At that time people e.g. my then-colleagues at @NRO just didn't realize that immigration policy could have this effect, and U.S. Census hadn't estimated when whites would be minority. Progress!https://t.co/Wi6B3h7BOT

We also referenced it here:

It turns out three black males are responsible for the wanton murder of 13-year old white girl Landry Anglin. They were engaged in a rolling shootout, when one of the bullets they fired struck her as she was inside the presumed safety of her home. https://t.co/JUeVommRMp

Refusing to admit gun crime is largely a black problem is just outrageously uncreatively stupid—gun control advocates frequently use the "blacks hardest hit" argument for restricting access to guns by Americans in general, including whites.

But Oliver seems to think that for a white person to reference this fact makes him racist.