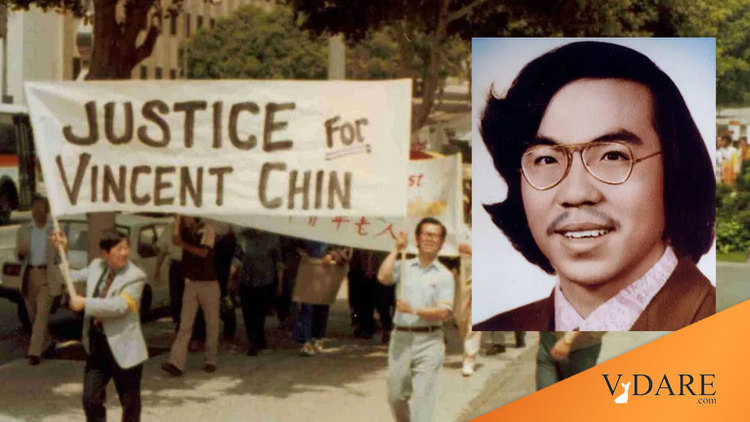 Vincent Chin: The Asian Emmett Till

Vincent Chin, a Chinese immigrant, was beaten to death after being pursued by two white Detroit autoworkers in 1982. On the 40th anniversary of his death, many hear frightening echoes.

Vincent Chin is the Asian Emmett Till.

Of course, being the Asian Emmett Till is a little like being the Asian LeBron James. In case you are wondering, going back through the last ten years, the Times has mentioned “Vincent Chin” 24 times but “Emmett Till” 433 times.

What about black-on-white racist hate crimes, such as the Zebra Murders in Northern California in the 1970s in which Nation of Islam offshoot Death Angels murdered at least 15 (and perhaps as many as 60 or more) random whites? Looking for Zebra Murder/s or Zebra Killing/s, I find two mentions in the New York Times over the last decade. Why would the Newspaper of Record want to mention a local police blotter triviality like that when there are always late-breaking Emmett Till newsflashes?

MADISON HEIGHTS, Mich. — When Vincent Chin, a Chinese American man who lived near Detroit, was beaten to death with a baseball bat after being pursued by two white autoworkers in 1982, it horrified and mobilized Asian Americans across ethnic and linguistic lines.

Mr. Chin was killed at a time when the rise of Japanese carmakers and the collapse of Detroit’s auto industry had contributed to a rise in anti-Asian racism. But over time, his death began to fade from collective memory.

Stephanie Chang, the first Asian American woman elected to the Michigan Legislature, does not recall hearing about the fatal beating of Mr. Chin until she was in high school. Rebeka Islam, who leads an Asian American voting organization in the Detroit area, was not aware of the case until a few years ago. Ian Shin, a University of Michigan historian who studies Asian Americans, said he did not know of Mr. Chin’s death until college.

Now, with the 40th anniversary of the killing approaching this month, at a time of an alarming surge in anti-Asian violence, a younger group of Asian Americans has sought to bring attention to the case, combining forces with some of those who led the initial fight to seek justice for Mr. Chin. At stake, they say, is not just the legacy of one man, but painful lessons about prejudice that have been made all the more urgent by the coronavirus pandemic, the breakdown in U.S.-China relations and the spate of anti-Asian hate crimes seen across the country over the past two years.

“As bad as things were during the auto crisis, we didn’t have these mass assaults on Asians all over the country,” said James W. Shimoura, a lawyer who is a Detroit native and a Japanese American, and who volunteered on the Chin case in the 1980s. “It’s worse now. It’s absolutely worse now than it was 40 years ago.”

Asian Americans have been living in increased fear of racism and physical violence since Covid-19 was first detected in China two and a half years ago. Early in the pandemic, President Donald J. Trump and others repeatedly used terms like “kung flu” and “Chinese virus” to describe the pathogen. That discourse, Asian American leaders said, emboldened some people to act out hatefully, echoing the climate at the time of Mr. Chin’s killing.

“People see the parallels of scapegoating an ethnic group or an entire racial group for something that is clearly not actually due to that group, whether it was the struggling auto industry in the ’80s or the coronavirus now,” said Ms. Chang, a state senator from Detroit.

… A jury in a second federal trial acquitted him, finding no proof of a racial motive for the killing. Both men insisted they were not motivated by racial hate.