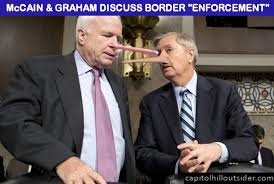 CARLSON: Senator McCain, when you read stories about law enforcement in say, Minneapolis, having to deal with people joining ISIS — that’s a result of our refugee resettlement policy — and you don’t worry a lot about that happening again or to a greater degree?

After some incoherent mumbling McCain found his line:

I’m not for unleashing a flood of refugees in this country…There are some refugees that I think we could take into this country as we have, as we did after the Vietnam War and we have in other places but they have to be sure that they are not a threat to the United States of America. Now what has happened is people have been recruited and radicalized by the internet. You’re talking about two different problems here, my friend.

(VDARE.com emphasis) What worries Patriots is not (yet) that Syrian refugees are going to be a flood but that importing any appreciable number of Muslim men of military age is likely to be a Jihadist disaster, especially in view of America’s abrasive policy in the Middle East.

THIS IS OBVIOUS! Remember Peter Brimelow’s blog Down The Memory Hole (contd.): Why Is No-one Asking How Mohammod Youssuf Abdulazeez’ Parents Got To U.S.? about July’s Chattanooga Marine murders!

So McCain’s answer is extremely significant. He has been told to say the problem is not that these young men are Muslim, but that free speech on the internet is dangerous. To repeat

…what has happened is people have been recruited and radicalized by the internet.

This is a familiar pattern which keeps turning up. In 2012 I asked Will The ADL Use CISPA To Take Over Internet And Repress Free Speech? In pursuit of Majority/Minority America, the people of this country are going to forced to abandon their key political tradition, a question I raised in July Fourth Fear: Can Free Speech (And America) Survive A Minority-Dominated Supreme Court?

What a despicable creature John McCain is. What on earth did the North Vietnamese do to him?