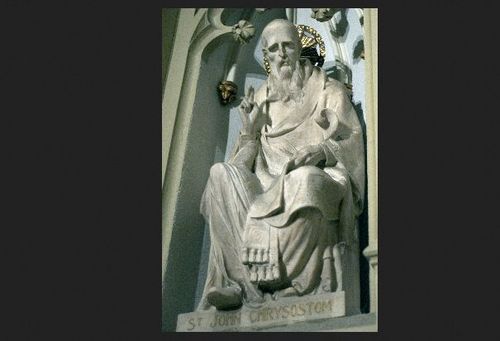 Happy St. John Chrysostom Day! The picture is of the sculpture in New York's St. Patrick's Cathedral, which Pope Francis is to visit in his upcoming ominous tour of the U.S.

Oh, and it's also Rosh Hashanah, which begins at sunset September 13.

VDARE.com does not advocate a War On Rosh Hashanah to counter the War On Christmas. But it has now become a multicultural must to step on Christmas by never mentioning it except in connection with other “holidays”, notably Hanukkah, aptly described by American Heritage's Frederic Schwarz (December 2000) as the “Jewish Kwanzaa”. Somehow, however, the MSM neglects to provide the nearest Saint's day in the Christian calendar to each year's Rosh Hashanah, Yom Kippur and Passover—there are a lot of saints!—so it has become a VDARE.com service (as so often) to fill the gap.

Still, unlike the unpleasant War On Christmas perpetrators, VDARE.com does wish everyone a Happy—sincerely.