Jamaican Felon: Give Me Criminal Alien Amnesty Because I Was In The Navy

The next Obama Regime move on amnesty has been telegraphed in the media, allowing the return of criminal aliens previously deported.  The media is full of heart breaking stories of criminal aliens who had the misfortune of being convicted of crimes and deported.  And always it is so coincidentally their first offense, and they really, truly, did not mean to do it anyway.

I Served My Country. Then It Kicked Me Out 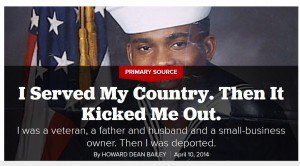 I often think about Friday dinners with my family. Every Friday, no matter what, my wife and I took our two children out to eat; it was a ritual we looked forward to all week. We would sometimes try new restaurants, but my children’s favorite was the Olive Garden. My daughter loved to order Shirley Temples and my son always wanted whatever I was having, so I’d order two of the same meal for us.

Those memories feel a world away from where I’m living now, in Trelawny, on Jamaica’s north coast. I’m trying to get a start as a pig farmer, but it’s much harder than I expected. It costs about $200 a week to feed the pigs, and there’s a water shortage so I have to walk about a mile each way to get river water for them. My family in the United States sent me $1,500 to get the business started but now I fear I may lose it all.

Just a few years ago, I had a great life in the Tidewater area of Virginia. I had a wonderful wife who is a glass artist, and our two children were thriving. My trucking business was starting to take off. We were hauling goods from Norfolk’s port to distribution centers for Target and Wal-Mart. My wife and I bought our first house and had money in the bank.

What Bailey gives us is a fairy tale version of his life and how much he contributes to the United States, obviously trying to differentiate himself from the millions of other aliens who live off welfare. And he goes on the minimize what he describes as a "stupid mistake."

I applied to become a U.S. citizen in 2005 and answered all the questions on the application honestly, even admitting to a stupid mistake I’d made years earlier. I passed the written and oral tests and completed the Citizenship and Immigration Services biometrics exam. I waited and waited, and when I called to ask whether there was a problem no one had answers.

Here Bailey hides his crime, minimizing it, hiding it among all the minor issues involved in a citizenship application, written examination, oral examination, and, of course, fingerprinting.

What he does not tell us is that the written and oral examinations are a joke, ten simple questions of which one must get six correct.  Something millions of immigrants manage to do successfully.  All those other immigrants, without criminal convictions, do.

They also all go through the taking of biometrics, which is a photograph and fingerprinting.  It is not an exam.  You do not pass it, except in that the fingerprints and the applicants name are run in the Federal Bureau of Investigation databases of criminal arrests and convictions.  Which tells us Bailey isn't too bright.

He should have left well enough alone.  He brought himself to the attention of the government by applying for citizenship.  He was quite fortunate that he was not deported after he was released for the crime he has yet to describe for the reader of the Politico puff-piece.

I was 17 when I came to New York to join my mother, who had left my siblings, my father and me behind near Kingston while she worked to build a better life for us in the United States. She was a legal permanent resident and worked two jobs as a home health aide, saving money so we could join her. My mom left for the United States in 1985 and came back four years later to get me and my brothers. She’d saved enough money and finished all the paperwork so our family could be reunited. Each of us was able to come to the United States legally with a green card.

Hmmm, Jamaica.  Now what does one associate with Jamaica? Why the Rastafarians and marijuana. And just what was Bailey's "stupid" and quite incredulously singular "mistake?"

After I moved in with Judith, I met another Jamaican guy on the base and we became friendly. We shared a love for the music and the culture of our home country. One day I bumped into him and he asked for a favor. A friend was sending him a couple of packages from New York, he said, and he didn’t have an address other than the base. Could they come to my house? I gave it no thought. Sure, I said. When the boxes arrived one morning, each about the size of a case of beer, I was a little annoyed because I needed to get out the door to school. I called the guy to ask what he wanted me to do with them and he asked me to drop them off. I jotted down the address and tossed the packages in the car, running late already. I was driving toward the city limits when the police pulled me over. I never saw that “friend” again.

The boxes came from California, not New York, and were filled with marijuana. The cops had been tracking the packages. I had never smoked marijuana—still haven’t to this day. I don’t do drugs and rarely drink. But Virginia has always been tough on drug crimes, and the lawyer I hired suggested I take a plea deal: admit to felony possession of marijuana with intent to distribute, and do 15 months in a state work camp rather than go to trial and risk much more. As best I can tell, the other guy was never arrested or charged with anything.

How big a surprise is that.  A virtually unemployed Jamaican, working as a DJ, which probably did not pay the bills for school and living expenses, gets involved in marijuana dealing.  Note how the "friend" is unnamed and how the "friend" did not want his boxes delivered to the base?  Red flag, alarm bells should have been ringing.  Then the boxes are the size of beer cases and undoubtedly reek of the rather pungent smell of marijuana.  Nothing suspicious there.  And just as unlikely is that an under-employed Jamaican just happened to be doing a favor for a Jamaican friend who can't get deliveries because he lives on a Navy base.

Then we have CNN weighing in on Bailey and other deported criminals, who all are veterans.

Bailey is one of more than 23,000 permanent legal residents who were deported in 2012. The number of veterans is unknown because the Department of Homeland Security says it doesn't keep those records and neither do other government agencies.

But the club is not an exclusive one. For instance, the group Banished Veterans, founded by a deported vet Hector Barajas, is in touch with veterans in 19 countries. He said he knows of six living in Jamaica from the Vietnam War, the Gulf War and the Iraq War. And he estimates that as many as 30,000 former service members have been deported since 1996, while other groups put the total at several thousand.

There appears to be a sense of entitlement here, alien veterans should not be subject to deportation for their crimes.

Rick Weidman, executive director for policy and government affairs for Vietnam Veterans of America said veterans facing deportation contact his organization for help. He said he draws a line at helping violent criminals but "to deport an individual after they put their lives on the line, 98 percent of the American people have not done that."

But Bailey did not put his life on the line, he was in the rear with the gear.

After graduating from high school in New York, Bailey did a four-year stint as a communications specialist in the Navy, serving in the first Gulf War and traveling around the world — to Egypt, Italy, Israel and Spain. He was one of thousands serving in the early 1990s who weren't U.S. citizens.

I checked Wikipedia, there have been no U.S. combat actions in Israel—there was the  unpleasantness with the USS Liberty, but that was in the 60s—Egypt, or Spain, and combat operations in Italy ended in 1944. Life in the Navy has been fairly safe since WWII.
Of course, the solution is more "discretion" in deciding who gets deported, but there is no "discretion" for criminal aliens.  Only an illegal and unconstitutional Administrative Amnesty can help criminal aliens as the removal of criminal aliens is mandated by law.
And the plan is for the Obama Regime to bring back these criminals:

Alisa Wellek with the Immigrant Defense Project, who is currently representing Bailey, said Obama should address the issue of tens of thousands of legal permanent residents being deported each year.

"The Obama administration has the power to exercise discretion and provide deportation relief in cases like Howard's, and should do so without any further delay," she said.

That demand is clear enough, much like the first demand for the Obama Regime Administrative Amnesty.