One of the disturbing by-products of Obama’s widely advertised open-borders policy is the surge of unaccompanied children illegally entering the US. Even very young children are endangered by parents who urge them to travel hundreds of dangerous miles by themselves. A January report by the Wall Street Journal estimated that 60,000 kids will cross the border by themselves this year (Flow of Unaccompanied Minors Tests U.S. Immigration Agencies).

The media like to spin the issue as one of family reunification, where kiddies are supposed to be reunited with mom and dad in mooching a better life in America. But some of the cases look more like belated birth control, where youngsters are pushed out of the home at a very young age because they are somehow inconvenient.

How dangerous is the journey? Consider the clip from the documentary Which Way Home which chronicles the experiences of young boys riding the rails north. It’s all fun and games, with the kids hanging off the side of the train and flapping their arms, till the end of the clip where we learn two boys died when they didn’t duck for a tunnel. 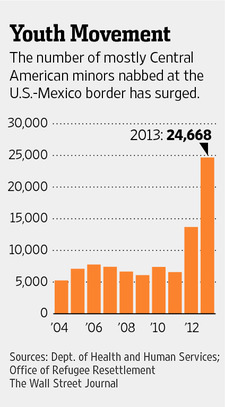 Nevertheless, they keep coming, presumably because they expect to be well cared for, since Washington has accepted the role of welfare provider to the world. Last year, it was reported that DHS agents actually delivered illegal alien kids to their illegal alien parents in the US.

The feds should instead hand the kids over to the embassies of their home nations for them to handle. The American taxpayer should not be made responsible for the squatters of the world, whatever their age.

But the decision has been made to transform part of an air force base into a flop house for kiddie illegal aliens, which can only incentivize more to come. When the government rewards a behavior, it can expect more of it.

Record-breaking numbers of children and teenagers caught in the U.S. illegally and alone have overwhelmed the federal government’s detention network, prompting officials to start housing up to 1,000 on a San Antonio Air Force base.

Kenneth Wolfe, an Office of Refugee Resettlement spokesman, said Friday that the Department of Defense has agreed to start temporarily housing children at Joint Base San Antonio-Lackland starting on Sunday.

Resettlement agency officials used the base temporarily as an emergency shelter once before, in the spring of 2012, when the numbers of children caught crossing the border jumped sharply, leaving the federal government scrambling to find adequate bed space.

Since then, their numbers have continued to grow exponentially, driven by what advocates are calling a “humanitarian crisis” in Central and South America. Some 60,000 unaccompanied children and teens are expected this year – up from about 6,560 in 2011, according to the agency.

The exact cause of the influx has stumped academics, government officials and advocates. They describe a “perfect storm” of factors: lack of opportunity at home; family ties in the U.S. pulling them north; and the overriding factor – the rise of violent drug cartels and gangs in Honduras, El Salvador, Guatemala and Mexico.

“It’s becoming more and more clear that they are fleeing for their own safety,” said Michelle Brane, the director of the Migrant Rights and Justice program with the Women’s Refugee Committee. “Violence in the region is driving people out.”

Once children from countries other than Mexico are caught in the U.S. illegally without a parent or close relative, they are transferred to the resettlement agency within 24 hours and housed in a sprawling network of more than 90 shelters, group and foster care programs, juvenile detention and behavioral treatment centers.

Advocates have raised concerns about the strain on the detention network, stressing the need to provide children housed in “temporary” shelters – like the military base – with the same protections and rights, including access to legal presentations and screenings. When the government housed children on the Air Force base in 2012, they initially had only an hour of education daily, compared with six in regular shelters. They also were not assigned mental health clinicians, which is standard practice for those detained in regular shelters, although on-call mental health services were available.

“We understand they are going to have to use emergency facilities, but they have to ensure kids have the same access to protections and services,” Brane said.

The number of children housed on the base will be far greater than most at resettlement agency shelters in Texas, which range from 24 beds to as many as 290.

Oscar Balladares, a Lackland spokesman, said Defense Department officials are making the facility available but will not otherwise be involved in the children’s care.

“This is their program; all we’re doing is supplying the facilities,” Balladares said.

As the number of children entering the system balloons, the government is releasing them at record speed to relatives and other “sponsors” in the U.S. to await the outcome of their immigration court cases.

About 90 percent are now released to sponsors, up from about 65 percent before the steep influx. Most children spend only about a month in federal custody, about half as long they did a few years ago.