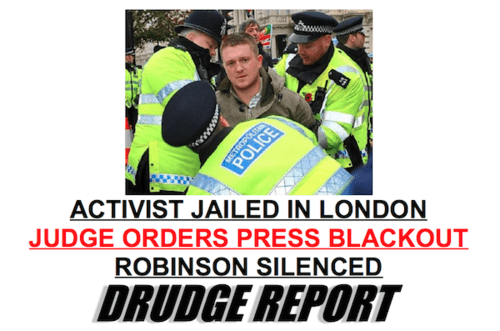 Britain’s recent arrest of freedom fighter Tommy Robinson was a reminder of President Reagan’s warning that “Freedom is never more than one generation away from extinction.”

Robinson was acting as a citizen journalist to cover a muslim gang-rape trial when police arrested him for “breach of the peace”, but clearly the aim of the government was to shut down the speech of anyone who disagrees with Britain’s slavish cowering to Islam. He was quickly whisked away to a 13-month jail sentence which could be dangerous since Britain’s jails have no shortage of jihadist muslims. Furthermore, the government slapped a gag order on the press about the case — an example of how every nation that imagines itself to be a home of freedom needs a First Amendment.

Geert Wilders — who has had his own struggles against censorship in the Netherlands — made a statement calling for free speech to be restored:

The Drudge Report had an unusually large headline spread about the case on May 28: 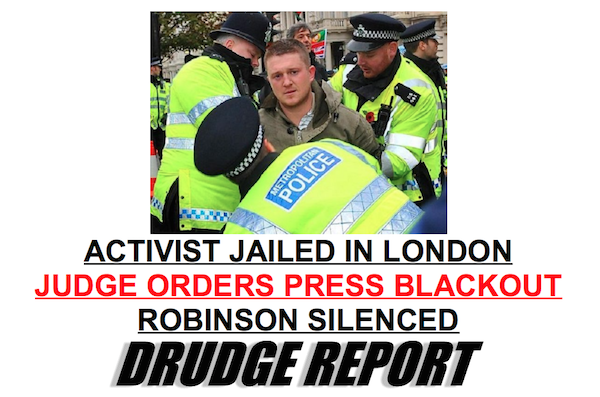 Paul Weston has also tangled with British authorities about censorship: in 2014 he was arrested for quoting Winston Churchill’s 1899 remarks about Islam’s retrograde culture. So Weston is well positioned to judge what the Tommy Robinson matter signifies about the collapse of the British nation:

There are a number of court cases taking place in Britain which are subject to reporting restrictions. A good percentage of these — and we really don’t know how many, which I think is rather the idea — relate to Muslim gang-rape trials. Tommy was under a 13-month suspended sentence for previously reporting on a gang-rape trial subject to reporting restrictions. In other words, if he broke the law again he would then serve the jail time as per the initial sentence.

I’m not sure if the trial he was reporting on when he was arrested was yet another “reporting restriction” case, but if it was (which I think it was) the police have a duty to issue a warning before taking action if the warning was ignored. Again, I am unsure as to what happened here.

But the police made no mention of reporting restrictions or contempt of court; they arrested him for “breaching the peace” which would seem to be a total fabrication and therefore unlawful. His immediate hearing and sentencing suggests this was a planned action by the police (and our lovely government) in order to shut him down.

To further reinforce the actions of a totalitarian state, a reporting restriction has now been put into operation with regard to his arrest. Tommy has been “disappeared” in much the same manner as countless others were airbrushed out of existence in genuine totalitarian regimes abroad, but I think this is the first time in England that a citizen has been “disappeared” in such a blatant way.

Even more horrifying is the supine manner in which this grotesque act of totalitarianism has been received by our media and purported civil-liberties merchants, none of whom have raised a murmur of disapproval at the time of this writing.

Couple this with the video of the woman arrested a few days ago by the police who threatened to break her down if she refused to open it — “DO NOT RESIST US! DO NOT RESIST US!” and I think it is very clear that the government, given the choice of crushing Islam or crushing those who question Islam, have chosen to crush the latter.

So the decent, democratic Britain I was born into has now gone. I warned some years ago of the direction the British police were taking (“Multiculturalism Has Destroyed the British Police”), and it is time to realise Britain is now a genuine Police State.

As the Islamic threat grows via demographics and violence, so the grip of the Police State will increase over the dissidents. Britain has three progressive routes now open to it: First, submit to the State. Second, submit to Islam after the State submits to Islam. Third, engage in revolution within the next decade in order to head off the two former routes.

I don’t think we will, though. I think Britain is finished as a country, culture and people. Our only hope of achieving revolutionary thought is via total economic collapse. When we are hungry and cold we might, just might, become angry enough to revolt. At the moment, however, we can fly abroad to the sun-kissed beaches of Ibiza and get completely trolleyed even as our country and all that is stands for is incrementally stolen from us by 7th century savages in alliance with our home-grown Traitor Class.

Tommy was a threat to the Traitor Class, so they have removed him. He won’t be the last.