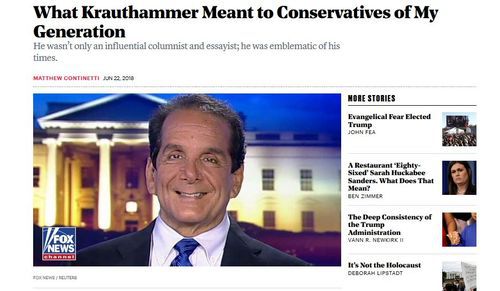 The death of neoconservative pundit Charles Krauthammer has produced a tsunami of tributes. The Washington Post published the Pulitzer Prize winner’s obituary on the front page and dedicated most of the op/ed page to selected bits of wisdom from Krauthammer’s columns over the years.

Matthew Continetti noted in The Atlantic that “as a teenager in suburban Virginia interested in politics and foreign affairs, I was captivated by his clarity, his mordant wit, his breadth of knowledge, his incisiveness, his willingness to entertain all arguments, and his adamantine defense of democracy, freedom, and pluralism. Then I discovered I was one of the lucky ones: I also could read him in my local paper, The Washington Post.”

Not everyone was so enamored.

Krauthammer’s column, “Buchanan Explained,” dated March 1, 1992, shortly after Pat Buchanan won the New Hampshire primary, claimed that “The real problem with Buchanan (as Jacob Weisberg suggested two years ago in the New Republic) is not that his instincts are antisemitic but that they are, in various and distinct ways, fascistic.” In an explosive rage of indignation, Murray Rothbard, a Buchanan supporter and libertarian sage, in a letter to Sam Francis on March 1, 1992, wrote,

Clearly the Menshevik-neocon Comintern has met, and decided to escalate the attack on Pat, subordinate the “anti-Semitism” garbage, which obviously was not working, and go straight to the cry of “fascism.” By calling everyone from Hitler to Franco to Peron to Charles Lindbergh “fascist”, they are, of course, adopting the lying definition of “fascism” pushed in the late 1930s by the Stalinist Comintern. Bolshevik, Menshevik, what’s the difference?

No sooner had Krauthammer, the “scholar” and “theoretician” of this crew, written his column, than Bill Bennett, neo-con Thug, publicly accused Pat of “flirting with fascism.”  [Links added]

The problem with Krauthammer and the rest of the neoconservative Comintern is that when it comes to “conserving” what really matters in the survival of nation-states—blood and soil—their political allegiance remains with the open-borders globalism that fuels the destruction of historic European-based nation states.