Jack The Ripper, And Other Homicidal Immigrants 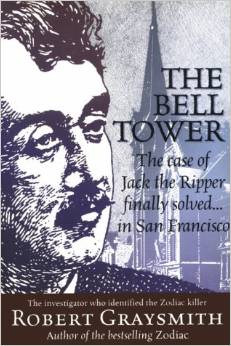 I couldn't say if the thesis of this book (The Bell Tower: The Case of Jack the Ripper Finally Solved... in San Francisco ) is true or not. It's one of those things where the writer says "Aha! I see it all now!" and falls in love with his theory.

The year is 1896: The Jack the Ripper murders stop as mysteriously as they started. Five years later, in a San Francisco church, brutally murdered priests, choirboys, and parishioners begin to appear. The pastor, an English priest, bears an uncanny resemblance to the one eyewitness report of the sole survivor of a Jack the Ripper attack in London years earlier. But another man has already been arrested, tried, and convicted for the San Francisco slayings....

Could be true, could not be true. But what it made me think of is that immigrants are frequently fleeing not persecution but prosecution.

If you were Jack The Ripper, and had committed all those murders in Whitechapel in the 1880, you might very well feel that London was too hot for you and emigrate to America, which was wide open at the time. And that would be too bad for the inhabitants of San Francisco...

Conan Doyle's Sherlock Holmes stories of that period used to feature Americans and Colonials  who were either wanted by the authorities or had been involved with gangs fleeing the other way, to England—leading to murders in quiet English towns.

That's the basis of A Study In Scarlet, The Boscombe Valley Mystery,  The Five Orange Pips, The Hound Of The Baskervilles, The Sign of The Four, and to a certain extent, The Valley Of Fear.  (Conan Doyle tended to repeat himself.)

But leaving aside wild theories and fiction, is the United States today letting in anyone like Jack The Ripper, someone who's been killing people overseas and might continue in America?

Yes, lots of them, they're called refugees!

This is especially obvious with the Chechen refugees who bombed the Boston Marathon, but also applies to various Hmong, African, Iraqi and Middle Eastern refugees.

They're "refugees from the violence" all right—frequently violent rebels against whoever is in power, who've spent years killing people, and aren't guaranteed to stop when they come to America.

Here are few examples of that