Amazon has moved in a big way toward automating its “fulfillment centers” where customer orders are processed. It uses the Kiva warehouse system shown in a local TV report (below), in which management is just a bit too cheerful about humans working happily alongside the zippy little machines which bring items to be packed into boxes and shipped. (See my earlier blog about the innovative Kiva, Amazon.com Robots Are in Place to Process Christmas Orders.)

Two Amazon processing centers are located near Dallas and now employ 1500 Texans, but you have to wonder for how long. Amazon wants to process and deliver orders ever more rapidly, and automating its operation to the maximum extent possible is a big part of that business plan. CEO Jeff Bezos got a lot of attention a couple years backs when he announced on Sixty Minutes that he hoped to use drones to deliver Amazon merchandise. Last May, he told investors at the annual meeting that he planned to increase Kiva robots from 1400 to 10,000 by year’s end.

Below, Kiva robots operate from a computer system that tracks and moves everything in the warehouse. They scoot under mobile racks of merchandise and move needed items to packing stations run by humans. 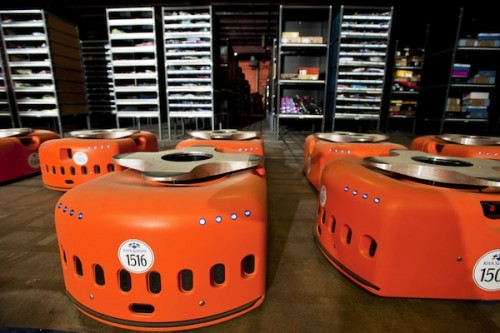 The Amazon business plan is typical of the highly automated future speeding our way where far fewer humans will be needed to provide goods and services. One analyst estimates that one in three jobs will be done by smart machines by 2025, just 10 years from now. A 2013 Oxford University study (“The Future of Employment: How Susceptible Are Jobs to Computerisation?”) concluded that “about 47 percent of total US employment is at risk” to be replaced by smart machines.

Meanwhile, the President is busy encouraging unskilled illegal aliens to flood across America’s open borders. There are no jobs for extra hundreds of thousands now, and the future will be even more bleak for unskilled persons.

The correct number of immigrants and illegal aliens for America’s automated future is ZERO.

COPPELL – Inside a Coppell warehouse, an army of robots are zipping around, working at a speed no human can.

Amazon’s distribution centers are high-tech operations that are the heart and soul of online shopping.

“Exciting,” since they sift through nearly 60 football fields worth of customer orders.

“This robot behind me weighs six tons and it has the ability to lift 1,600 pounds of product at one given time,” Seidel said.

It automatically recognizes when a palette needs to be loaded, lifted, and stored. And it makes sense for the country’s largest robotic arm to be here, where everything is bigger.

“We love being here in Texas,” Seidel said.

“I want to, again, continue to welcome you,” said Coppell Mayor Karen Hunt.

Hunt welcomes the big business, as do other local lawmakers.

“You’re creating jobs for the community, and that’s very important,” she said.

More than 1,500 Texans are now full-time Amazonians, working alongside the robots.

And the demand keeps growing for a little bit of everything.

“My officer manager – who was also my bodyman during Ebola – tells me the last thing that he got on Amazon Prime was the ‘Outbreak’ movie about Ebola,” Dallas County Judge Clay Jenkins told the crowd.

All laughter aside, what’s happening under this roof makes it convenient for us to spend more time under ours.

“You’re doing a lot to save people time,” Jenkins said. “Keep people at their house with their family.”