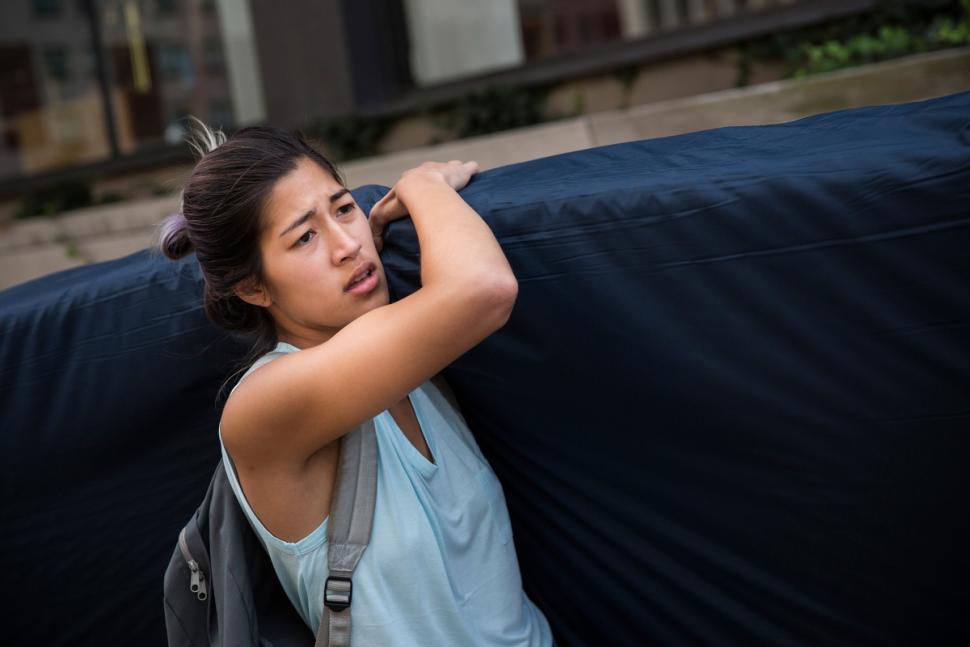 Traumatized Victim... or another "Jackie?"

The other shoe may be about to drop in the case of "Mattress Girl" Emma Sulkowicz.  Sulkowicz claimed she was raped, started carrying a mattress around on campus, started a "Carry the Weight" campaign, and got to attend the State of the Union.

Now, the student whom she accused, Jean-Paul Nungesser, has sued the university because it didn't shield him from harassment although no charges were ever presented against him.

Mr. Nungesser, a German citizen, said the ensuing publicity has hurt his chances of remaining in the U.S., given that his job prospects have been hurt by the publicity surrounding the case.

The students engaged in sexual activity in August 2012, but Mr. Nungesser says the encounter was consensual, while Ms. Sulkowicz says she was raped.

The tide started to turn with this case with a devastating report in The Daily Beast by Cathy Young that carried Nungesser's story.  Crucially, Nungesser saved the text messages that showed Sulkowicz was trying to arrange additional meetings with him and heavily flirting, hardly the behavior of someone who later claimed to be traumatized by a vicious rape [Columbia Student: I Didn't Rape Her, February 3, 2015]

In fairness, there were other accusations against Nungesser and all disclaimers taken as read about how a traumatized woman may act in ways that don't make sense.  But Nungesser was cleared, completely, of any wrongdoing in every case.  And these rape accusations mysteriously arrived after the relationship had ended.

If this reminds you of anything, it should.  This is more or less what happened at UVA, where the unrequited attention of a male led fake victim "Jackie" to create a national scandal.

This is a situation that should be followed closely, because the PC Climate of Terror, if unopposed, risks destroying the few legal protections we have left that all Americans rely upon.