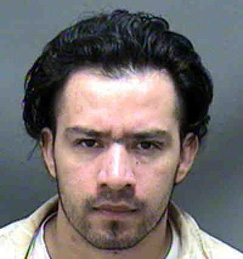 According to NPR, the feds are getting tougher on prosecutions of foreign gangsters by employing the death penalty when appropriate.

The poster thug for this story is an MS-13 gang banger who reportedly killed five people, so he is a fine candidate for Old Sparky. Nobody outside of his momma, la Raza and the ACLU would disagree.

This escalation in punishment is likely a recognition that the foreign gang crime problem is getting worse, although Obama and henchpersons keep singing the tune that the border is ”as secure as it ever has been.”

That’s a lie, as the worsening situation in Arizona indicates.

(Since this is an NPR report, no mention is made that the subject is an illegal alien, just that he is ”a citizen of El Salvador.”)

Alejandro Enrique Ramirez Umana has an unfortunate claim on history. He is the first member of the MS-13, or Mara Salvatrucha, gang to be sentenced to death under the federal system of capital punishment, according to the Justice Department.

Prosecutors and FBI officials say the Umana investigation, which took them from North Carolina to California to El Salvador, is a model for how federal authorities will attack a growing gang threat that is leaching into smaller cities across America’s heartland.

Umana is only 25. But over the course of his relatively short life, he allegedly killed five people in his role as a traveling evangelist for the MS-13 gang.

For the past few months, Umana has been living on federal death row in Indiana. Federal prosecutor Jill Rose helped put him there. ”He murdered two men in a very busy restaurant in Greensboro, N.C., on a Saturday night. It was a few weeks before Christmas. He and some other gang members were having dinner in this restaurant,” Rose says.

Two brothers who did not belong to a gang were eating nearby. They exchanged words with Umana. Then, Rose says, things went south.

”Mr. Umana stood up, pulled a Ruger 45 semi-automatic pistol out of his waist and blasted away there in the middle of this busy restaurant. He killed our two victims, continued to shoot as he backed out of the restaurant,” Rose says. [. . .]

Federal authorities have turned the investigation into a model for their strategy: to build bigger national prosecutions of gangs, to work with investigators across the U.S. and Central America, and to sometimes ask a jury to vote for capital punishment.

Aaron Escorza leads the FBI’s national task force against the Mara Salvatrucha gang. He says that MS-13 is one of the most violent gangs in the U.S., with 10,000 members in more than 40 states.