This case has gotten almost no national attention, even though the criminal is an illegal alien Muslim from Jordan who tried to blow up a skyscraper. Perhaps the locale – Dallas – determined the dinosaur media’s disinterest. By comparison, the similarly failed Times Square (New York City!) bomber Faisal Shahzad, got a lot of ink. 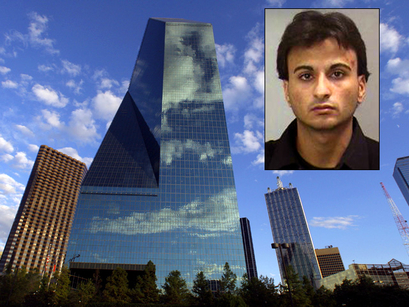 A Jordanian man caught in an FBI sting trying to blow up a Dallas skyscraper was sentenced Tuesday to 24 years in federal prison.

Hosam Smadi had faced up to life in prison but received a reduced sentence after pleading guilty in May to attempted use of a weapon of mass destruction.

Smadi, 20, will likely be deported after serving his sentence.

Smadi acknowledged leaving what he thought was a truck bomb in a garage beneath the Fountain Place building in September 2009. Smadi said he parked the truck, activated a timer connected to the decoy provided by undercover FBI agents, then rode away to watch the explosion.

Smadi dialed a cell phone number from the roof of a nearby parking garage, where he had planned to watch the explosion. The number was supposed to set off his truck bomb. It instead alerted tactical agents hiding in a stairwell, who swarmed the rooftop and arrested the teenager.

Posing as members of an al-Qaida sleeper cell, three undercover FBI employees had monitored Smadi since January 2009. After he shared his plans to blow up the office tower, they helped him secure a truck and fake bomb used to carry out the mission, according to court documents.

Since the arrest, Smadi’s public defenders have portrayed their client as a troubled and depressed young man, who exhibited signs of depression and mental illness when his parents separated and then suffered a breakdown after his mother’s death from brain cancer. At the plea hearing in May, attorney Peter Fleury said Smadi had been diagnosed with schizophrenia by a prison doctor and a physician working for the defense.

FBI officials, however, tell a different story. After monitoring Smadi for nine months, they say the defendant was a committed would-be terrorist determined to connect with al-Qaida or Hamas. It was fortunate, they say, that they found him first, spewing hatred for America on an extremist website.

”Smadi was asked what he would do if he had never met the al Qa’ida 'sleeper’ cell … ,” said Tom Petrowski, a supervisory special agent with the FBI in Dallas, in an affidavit. ”Smadi replied that he would keep looking for such an entity to be a part of, even if it meant him having to leave the United States and go to Palestine and join Hamas or go back to Pakistan and join the Taliban.”

Daddy Smadi admitted being violent to his son (choking him, for example), then sent the teen to America because the kid was too messed up for him to deal with. Thanks a lot, bub!

The defense claimed insanity. Perhaps Smadi was depressed, but he followed the precepts of Islam to act out his frustrations, as have other possibly psychologically disturbed co-religionists. They include Naveed Haq (the Muslim who killed a woman at a Seattle Jewish center), Omeed Asiz Popal (the SUV jihadist in San Francisco), and Muzzammil Hassan (the Buffalo Muslim who felt ”incredible relief” after beheading his wife).