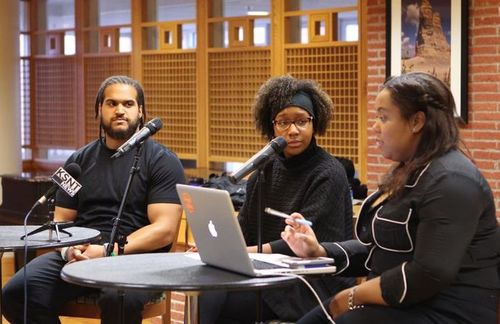 On November 18, Caleb Stephens, Katherine Rainey, and Kynnedi Grant deigned to speak to the press at KU. They called it a “press conference,” but it did not resemble any press conference I’ve ever seen. While a real press conference involves the parry-and-thrust of question-and-answer between speakers and reporters, at this event, each black speaker held a lecture expressing his hatred for whites in a stream of incoherent black supremacist slogans, and did not permit himself to be questioned.

This is not the transcript of the complete “press conference,” because the Wichita Eagle did not post the complete video. The one they did starts without any introduction, in the middle of a sentence. However, I spent hours playing and replaying it, trying in vain to make sense of it, and transcribed every intelligible word, though many of the sentences remain defiantly unintelligible. However, the text’s lack of intelligibility is the speakers’ fault. In any event, the video and text remain important evidence documenting the insanity of affirmative action.

Caleb Stephens is a 2014 KU alumnus and, based on a BSU photograph and his role in this hate-in, may be the de facto head of the racially segregated Black Student Union, even though as an alumnus, he is probably ineligible to currently be a member of said group, let alone its leader. Stephens unsuccessfully sought, in September, to win a vacant Lawrence city council seat, claiming “One of the things I don't carry is a political agenda.” [Caleb Stephens files for city commission vacancy by Kara Protasio, WOW!6 News, 14 September 2015; and City commissioners elect Lisa Larsen to fill vacant seat by Nikki Wentling, Lawrence Journal-World, October 6, 2015.]

Katherine “Kat” Rainey is a KU senior and former president of the BSU.

Current BSU President Kynnedi Grant is a junior at KU, and asserts that she was the victim of a racist hate crime at the hands of a number of nameless, faceless white men at an off-campus Halloween party during the wee hours of November 1, 2015. (No witnesses, no proof—probably a hoax.)  See  Is The University Of Kansas Suffering From A Massive Race Hoax? Troubling Screenshot Sent To VDARE.com. 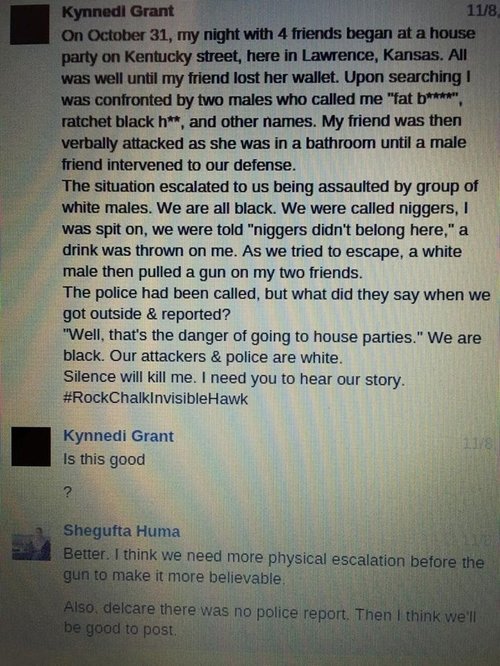 She has also asserted that she is the only member of the KU campus group, “Rock Chalk Invisible Hawk” (RCIH), which on November 11 made 15 non-negotiable demands of the KU administration, who is a member of BSU, when all of RCIH’s leaders are BSU leaders! The BSU’s 15 demands are variously illegal, unconstitutional, and evil. 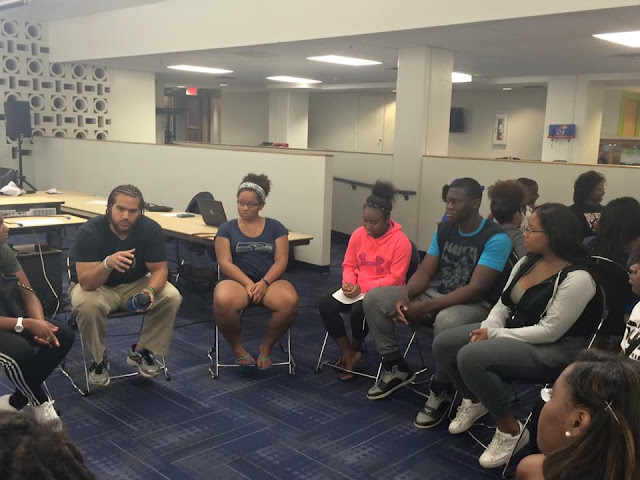 BSU: RCIH leader and 2014 KU alumnus Caleb Stephens leading a discussion on “Am I My Brother or My Sister’s Keeper?” Kynnedi Grant denied that anyone but her was a member of both the BSU and RCIH. And how can Stephens, who is no longer a student, even be eligible to be a member of the Black Student Union? He may well be the de facto leader of the BSU. Picture was posted on the BSU Facebook page on September 22, 2015.

Caleb Stephens: “… and safety and comfort. “We’re all entitled to feel safe, but we’re not all entitled to feel comfortable, especially when your comfort kills other people, whether it’s figuratively or literally. And so, at the end of the day—like, first of all, I don’t have free speech. Let’s just be real with that. We don’t have free speech. Because if we said some of the things people say, we would be, anything, just insert any negative thing that would happen, from getting hate mail to having death threats, things like that, the reality is that if free speech was really free speech this would be a different conversation. But we’re not a part of that.

[Translation from the racist double-talk: All whites must die, because their mere existence kills blacks. Note that absolutely no one at KU or in the mainstream or campus media has in any way impinged or sought to impinge upon Caleb Stephens’ freedom of speech, or challenged his racist assertions. ]

Katherine Rainey: “And again, we live in an institution that supports these white supremacist ideas. And so with that, you know, racist statements are considered free speech, and they are protected. And, you know, it is, you can have your opinion. You can think whatever you want, but when your opinion infringes on others’ rights and it harms someone, then it is wrong. And that’s unacceptable.

And the fact that we have institutions that support that really speaks to institutional racism, and the things we’re trying to combat.

[Translation from the double-talk: You can’t have your opinion. You can only have the opinion I tell you to have. Any opinion that disagrees with us—e.g., on race and IQ, crime, educational failure, illegitimacy, crime, etc.—is a “white supremacist” idea. The First Amendment and “freedom of speech” are white supremacist ideas. But what about white students and even profs? What free speech do they have? None!

N.S.: No one’s opinion can possibly “infringe on others’ rights.” Rainey simply wants to outlaw free speech for whites.]

Caleb Stephens: And one of the things we have to realize, is I just read a study recently that showed, empirically, that emotional abuse and trauma is far longer-lasting and more impacting than physical trauma, which includes sexual trauma, which is terrifying.

[I doubt that what he claims to have read showed any such thing “empirically.” If he didn’t just make it up, the article was a glorified op-ed.]

Caleb Stephens: So understand the cyber-bullying the these this hate speech culture that we are within is perpetuating the fact that we are not valuable enough to feel safe.

[Stephens is using bad grammar to hide rhetorical sleight-of-hand, and/or he’s a racist imbecile. Normally, I would delete from a transcript the typical impurities of ordinary speech, but in Stephens’ case, there’s nothing but impurities. He slapped together three inchoate, illiterate slogans: “cyber-bullying,” “hate speech culture,” and “we are not valuable enough to feel safe”; added rhetorical abuse of the phrase, “the fact” to sell an opinion about an irrational, emotional state that doesn’t make any sense; while being unwilling and/or unable to make any effort to turn the slogans into even a semi-coherent thought. The only thing I get out of his rambling is that he wants to censor online speech, but the entire political theater that he, Grant, and Rainey are leading, was dependent on online, social media. Imagine the moral and intellectual level of the students who follow his “teachings” at BSU meetings.] 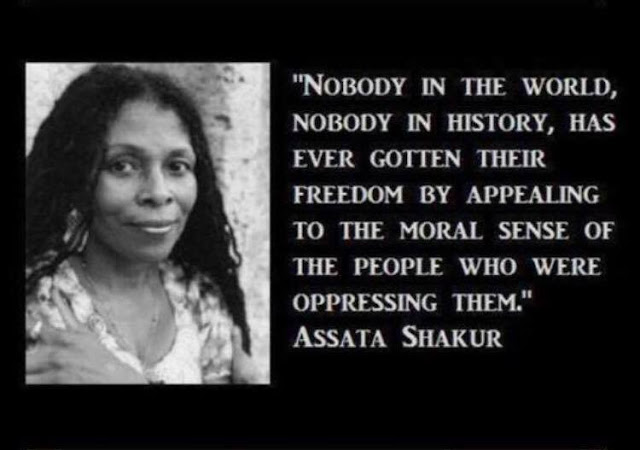 Kynnedi Grant: There is a sickening exploitation of pornography of black pain that uplifts every white supremacist structure that is ingrained in our country and our nation and the way that we operate.

[The foregoing paragraph was not off the cuff; Grant read it from a prepared text. And while she did, Stephens nodded approvingly, the way Communist New York City Mayor Bill de Blasio does, when one of his non-white-male flunkeys is speaking at a public event, in order to build up the speaker’s self-esteem.] 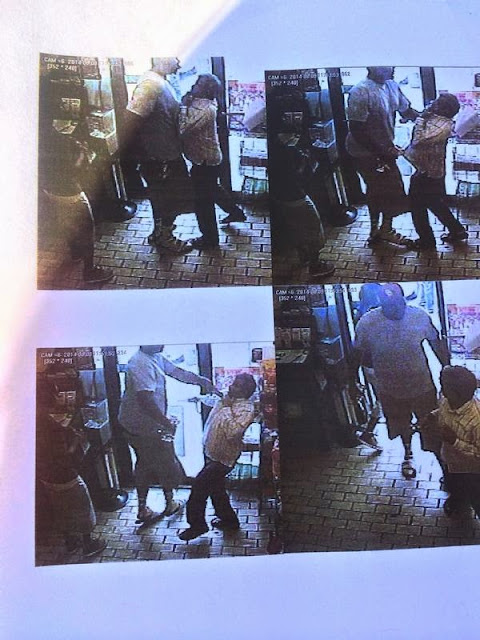 The racist, failed, aspiring murderer of white policemen, Mike Brown, is apparently another of Kynnedi Grant’s heroes. Brown was the official inspiration of the Mizzou hoaxers; the KU hoax was carried out in sympathy with the Mizzou hoaxers.

Kynnedi Grant: And so if you look on [unclear], and you look on other places, generally folks of, people of color are painted as bad, they’re scrutinized for their actions and their words.

[That was a complete lie. The national media almost always give blacks behaving badly a free pass, either suppressing the news entirely, hiding the races of black malefactors and white victims, respectively, and/or lying and conjuring up a racial fairy tale, in which whites are somehow at fault. Meanwhile, Grant’s wild lies are exciting her fellow supremacists.]

Kynnedi Grant: When you look at college riots at KC [unclear] and they tore down the goal posts at Potter Lake, it was just a bunch of rowdy college students, and they juxtapose that with protests in Ferguson, and it was a riot and it was violent, and it was all these different things. So the language is even used.

[There was no college “riot” at KU, just as there were no “protests” in Ferguson. Grant is talking racist fiction. She’s the pornographer. When the Kansas City Royals won the World Series last month, some young people broke into KU’s football stadium, tore down the football goalposts, threw them in Potter Lake, and committed some other vandalism. There was no violence, no mob, and the total damage caused was $10,000.

By contrast, blacks rioted repeatedly in Ferguson, enthusiastically supported by Grant, who lied about them on her Facebook page (this is unsurprising, given that her heroes are black supremacists who assassinate, or die trying to assassinate white policemen). The black rioters in Ferguson repeatedly committed arson; vandalism; looting; attacked policemen; committed racially-motivated attempted murder against white policemen; caused millions of dollars in damages; and completely destroyed an American town. And yet, the MSM generally refused to call the Ferguson riots “riots,” using instead the euphemism, “demonstrations.” Presenting minor, non-violent vandalism committed in sports celebrations by white college men as equally bad or worse than ultraviolent, racist riots committed by blacks is an established black supremacist habit that young activists presumably pick up from their racist parents, teachers, preachers, professors and media activists. (Royals fans tear down goal post at KU’s Memorial Stadium, Lawrence Journal-World, November 2, 2015.)]

The poster depicts the third member of Kynnedi Grant’s holy trinity, failed, aspiring, cop-killer Rick Dowdell, who tried to murder two white policemen in KU’s home of Lawrence, KS, in 1970, but fortunately got his just deserts.

Kynnedi Grant: So, free speech is very much a structure that does not apply to people of color ever. And there is a special weight that that free speech carries, because it’s generally hate speech that oppresses and continues to oppress black people especially.

[So whites must be muzzled.]

N.S.: With Kynnedi Grant, where does one even begin? Can anyone translate her insane rantings into English for me? Note that she has called herself “fearless,” and said that she plans on becoming a reporter. Her self-esteem is certainly high, and in today’s MSM environment, she just might he hired as “journalist.”

And what about the challenges facing white students?

The unintelligibility of Grant and her cohorts’ lectures remind me of an observation that my old logic teacher, philosopher-scientist Michael Levin, once made in a review of black supremacist Randall Robinson’s book-length rant demanding “reparations” for slavery from whites:

There are a few excellent black writers, but jumbles like this are all too typical of black intellectuals. What sort of disordered mind produces them? More urgently, how can whites — accustomed to language that communicates rather than wears down — deal with such minds? At the very least, whites must recognize that they face something fundamentally alien. [Never-Ending Guilt by Michael Levin, American Renaissance, May 2000.]