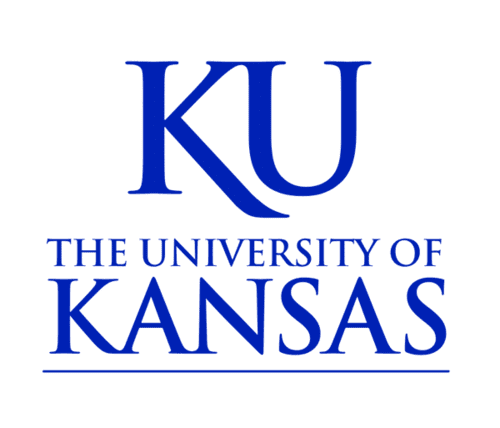 Is The University Of Kansas Suffering From A Massive Race Hoax? Troubling Screenshot Sent To VDARE.com

There's a long history of fake hate crimes both on and off campus. Such hoaxes are useful in creating media hysteria which justify the creation of phony jobs and academic sinecures which benefit the hoaxers.

What started all this? A serious hate crime.

Lawrence police are investigating an altercation involving racial slurs that reportedly occurred at a house party on Halloween night.

About 1:40 a.m. Nov. 1, officers responded to a report of an “out of control” house party in the 1300 block of Kentucky Street, according to Sgt. Trent McKinley, Lawrence Police Department spokesman.

Friday afternoon the investigation — listed as a battery and aggravated assault case — remained ongoing and no arrests had been made, McKinley said.

Word of the incident spread when Kynnedi Grant, president of Kansas University’s Black Student Union, shared her account of events on social media earlier this week and again in person before a crowd of 1,000 at KU’s town hall forum on race Wednesday.

On her Facebook page and at the forum, Grant said she and some black friends went to the party and, while searching for a friend’s lost wallet, were confronted by a group of white men and the situation escalated. They were called names and racial slurs, she said, and she was spit on and put in a “chokehold.” She said one white man pulled a gun on two of her friends. She said they spoke to police officers outside.

“No report was made, no comfort given to us,” she wrote Tuesday in a Facebook post that has been shared by more than 500 other people. “We are black. Our attackers and police are white.”

The incident is recorded on the Nov. 1 police call log, and five police units responded to the scene, according to the log.

Very serious, if true. But did it happen? A source has sent us the following screenshot. 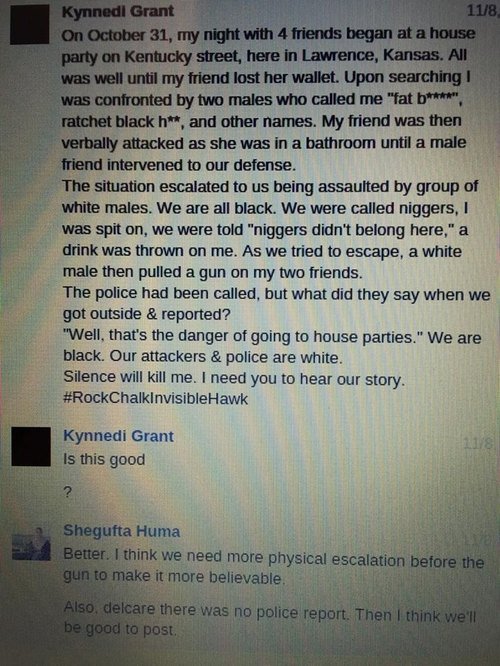 The image can be found here and has been viewed several thousand times. Presumably the police have also seen it.

The Facebook note posted by Kynnedi Grant can be found here. [Update: Already removed from Imgur—Archived link here.]  As you can see, there are two changes. One, there is more physical escalation. Two, there is the mention of no police report. These are the precisely changes that were suggested by "Shegufta Huma" to make the report more "believable."

Obviously, there will be a report of what the police took down on the night in question so more details will emerge out of all of this. VDARE.com will follow this case closely.

UPDATE: The "Invisible Hawks" have issued a denial: