It’s interesting that there is growing concern in the UK about the general increased crowdiness that is an unavoidable result of unsustainable immigration. The place was already crammed when the Labour Party purposely turned the I-spigot on full blast more than a decade ago.

But now the United Kingdom has reached nearly 660 residents per square mile, and average Brits can see that their country has rapidly become more crowded. People are talking about the need to stop importing more inhabitants.

Britain will struggle to handle ”catastrophic’ population growth unless changes are made, Daily Mail, June 9, 2010

Britain will struggle to handle ”catastrophic’ population growth in future unless urgent action is taken, a report has warned.

The predicted increase to 70million by 2029 will put unsustainable pressure on housing, schools and hospitals as well as natural resources such as food and water, experts said.

Current trends will see a city the size of Bristol added to the population of the UK every year for the next two decades.

But sustainable development group Forum for the Future said vast growth would cause huge rises in pollution and waste.

Its report called for urgent action to stop numbers reaching the expected highs and causing a fall in quality of life levels.

And it urged a ”rethink’ of the policy of importing labour to take skilled jobs. […]

The number of people in Britain shot up by more than three million under 13 years of Labour government.

Around 70 per cent of the increase was due to immigration — either directly through new arrivals or their children.

In the world population density map below, you can see that the UK is among the most dense nations, and the United States has entered the mid-range (83/square mile) with no end in sight. 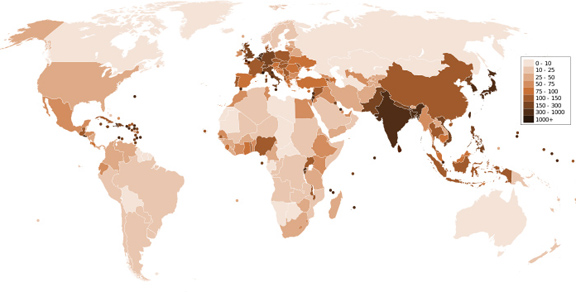